The Peugeot 307 is a small family car produced by the French manufacturer Peugeot since 2001. It was awarded the European Car of the Year title for 2002, and continues to be offered in China and certain South American markets through 2011 despite the French launch of the 308 (its intended successor) in September 2007.

The 307 was presented as the 307 Prométhée prototype at the 2000 Mondial de l'Automobile. The production hatchback versions were introduced to the European markets in 2001 as a successor to the Peugeot 306. The 307 was also sold in Australia, New Zealand, Asia, and (in 1.6 and 2.0 petrol versions) Mexico. In Brazil the 307 is sold with 1.6 and 2.0 flex (gas/ethanol) engines.

The 307s makes use of a reworked 306 platform, that can also be found on the Citroën Xsara as well as the 1991 Citroën ZX. However, the car is larger than the 306 in every direction.

The 307 continued the company's styling first seen on the Peugeot 206 and Peugeot 607. With upswept front lights and a steeply rising bonnet leading to a highly sloped windscreen (and the upright rear doors first seen on the 206), the 307 departed from the Pininfarina-designed themes employed on the previous two generations of Peugeots, as introduced with the Peugeot 205, and ending with the (evolutionary) Peugeot 406.

In 2005, the 307 was revised to meet the onslaught of rivals which had been launched since the introduction of the 307 in 2001. The front of the car was restyled featuring mildly revised lights, a new bonnet and the removal of the trademark Peugeot grille between the headlights. With the latter change, along with a new front bumper, the front of the car was now dominated by a larger air intake, as first established on the Peugeot 407, and which was now effectively the company's new grille.

At launch, the 307 was launched as a 3- and 5-door hatchback, though in 2002 the 307 range was expanded with the introduction of two estates, called the 307 Break and 307 SW. Externally they are almost identical, with the exception that the SW version has silver roof bars and a 3/4 length panoramic glass roof as standard equipment. Internally though, the 307 Break is a conventional estate, while the SW features an optional third row of removable seats so it is more flexible due to its MPV-like configuration. The SW exists because Peugeot did not develop a compact MPV spinoff as Citroën did with the Xsara Picasso, instead preferring to offer a more flexible version but maintaining the style and road manners of an estate.

The 307 CC, a cabriolet with a retractable hardtop, was launched in 2003 to compete against the new European coupé cabriolets.

In 2004, a four-door saloon version of the 307 was launched in China. The 307 is produced for the Chinese market by the Dongfeng Peugeot-Citroën Automobile, a joint venture with the PSA Group. This model was also built in Argentina between May 2006 and November 2010.

In 2006 Peugeot announced a prototype diesel-electric hybrid engine for the 307 that could achieve 83 miles per imperial gallon (3.4 L/100 km; 69 mpg-US), but was not intended for sale until at least 2010, by which time the 307 was replaced by the 308 and the Hybrid was still not launched. The Citroën C4 Hybride HDi was announced at the same time.

The Peugeot 307 WRC, a World Rally Car based on the 307 CC, replaced the multiple manufacturers' and drivers' championship-winning 206 WRC in the World Rally Championship for the 2004 season. The vehicle, nicknamed "The Flying Frog" and "The Whale", was plagued by transmission problems and only began to come into its element in competition towards the end of its factory-supported participation in the WRC. It has three WRC victories to its name, but saw its competition life cut short at the end of 2005 by PSA's decision to withdraw both Citroën and Peugeot from top-level rallying. It topped the podium in the series on the 2004 and 2005 Neste Rally Finland as well as in the 2005 Rally Japan. All the victories were at the hands of double world drivers' champion Marcus Grönholm. A private undertaking by seasoned Peugeot preparatory firm Bozian Racing, dubbed OMV Peugeot Norway World Rally Team, largely assumed responsibility for the running of WRC-spec 307s for the following 2006 season. Manfred Stohl and Henning Solberg were named as the driving personnel, with Stohl placing fourth in the overall drivers' standings.

The 307 WRC will be remembered for the accident that befell WRC competitors Markko Märtin and Michael Park on September 18, 2005, which resulted in co-driver Park's death. On stage 15 of Wales Rally GB, Märtin lost control of his 307 WRC and collided with a tree, killing Park instantly. This was the first fatality in a WRC event since 1993. 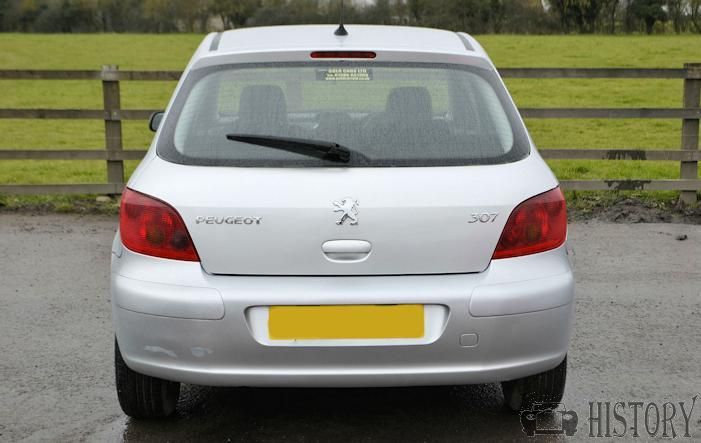