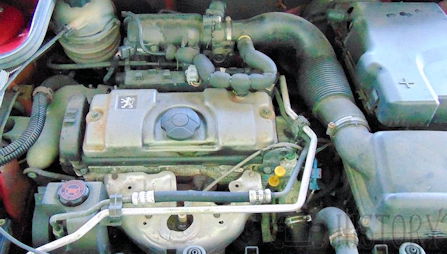 The PSA -TU engines are a series of small four-cylinder in - line engines used in various Peugeot and Citroën cars. The engine was introduced in 1986 with the launch of the Citroën AX , replacing the X Series, with many components in common with its predecessor. The TU is available either as a gasoline or diesel version, which bears the name TUD for distinction. The performance of the TU engines ranges from 29 to 92 kW (40 to 125 hp). The gasoline versions have capacity of 954, 1124, 1294, 1360 or 1587 cc, the diesel 1360 or 1527 cc.

The TU engine is or was used in the following vehicles:

Each TU engine is identified with a version code, for example TU3MC (KDX) stamped on a riveted aluminum plaque.

The badge contains the following information:

The TU 954 cc was the engine with the smallest displacement. Its bore is 70 mm with a stroke of 62 mm. There are five versions. Its power is 29 kW (40 hp), 33 kW (45 hp) or since the introduction of electronic fuel injection with catalyst 1992 37 kW (50 hp). He equipped the entry-level versions of the Citroën AX, the Peugeot 205, the Peugeot 106 and the Citroën Saxo. The normal compression ratio was 9.4. The production has been discontinued at Citroën Saxo and Peugeot 106 since the entry into force of the European emission standard Euro III on 1 January 2001.

The TU1 has a capacity of 1124 cc with a bore of 72 mm and a stroke of 69 mm. The power was initially 40.5 kW (55 hp), but with the introduction of the electronic injection and the catalytic converter in 1992, it was increased to 44 kW (60 hp). The introduction of multi-point injection led to compliance with the Euro 3 standard while maintaining power, with only a small increase in torque. This engine was since 2009, the entry-level model for Citroën C2 and C3 and the Peugeot 206th 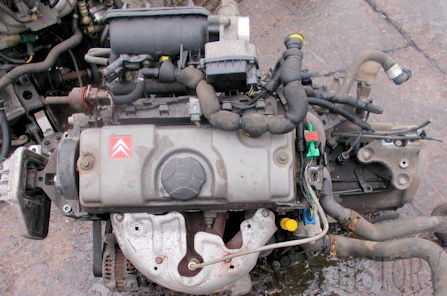