Australian Automotive manufacturer  Australia From 1963 to 1965 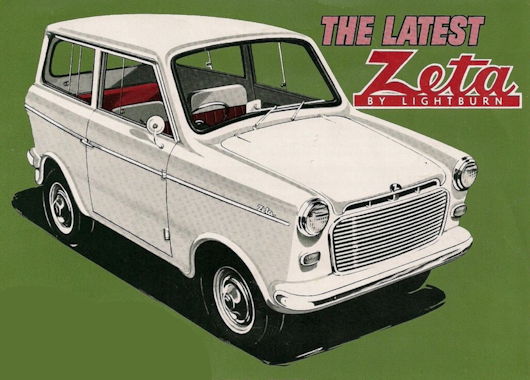 Lightburn is the name of an Australian engineering company . The company operated for a short time in the 1960s as an automaker and made the odd shaped Zeta Saloon . The brand name was Zeta . The cars were in the washing machine production in Camden Park in Adelaide and were offered in 1963 at the price of AU £ 595. The production was discontinued in 1965 and in 1966 the last vehicles were sold. Overall, fewer than 400 cars.

The zeta sedan was, as the pick-up, by a single cylinder -Zweitaktmotor Villiers of 324 cc displacement driven. The power of the front-mounted engine was passed through a four-speed manual transmission to the front wheels . The rear wheels were individually suspended on trailing trailing arms. The car with hatchback had no tailgate. To get into the trunk, the seats had to be removed, which was particularly easy according to a relevant advertising. The chassis was made of steel, the body of GRP . The interior was relatively large, but sparingly equipped. The windscreen was made of safety glass, the side and rear windows Perspex, The doors were also made of steel and had sliding windows. 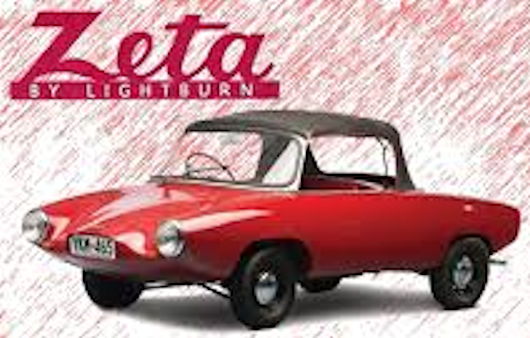 The Zeta Sports had a two-cylinder two- stroke engine from Sachs, which drove the rear wheels. This motor has made 19.5 bhp (14.4 kW) at 5000 min -1 and drive the wheels via a four-speed manual and semi-axes. This engine was originally built for the Messerschmitt Tiger Tg 500 , had a 70mm bore and 67mm stroke and was locked to the transmission. The production lilef from 1963 to 1965. In 1964 28 vehicles were sold.

According to specification, saloon and pick-up were equipped with Michelin tires size 125 R 12. The Villiers four-speed gearbox had no reverse gear. To reverse, the engine was stopped and restarted in the opposite direction, so that four gears were available for the reverse drive. The gasoline-oil mixture ran from the tank in front of the dashboard by gravity into the carburetor. The fuel gauge was a transparent hose that ran from the bottom of the tank through the dashboard. A test by automobile magazine Wheels says from the fuel gauge that "it indicated something between full and empty, depending on the angle of inclination, throttle position, and probably Greenwich Mean Time (GMT)."

The tiny sports model, which did not look unlike the Australian-built Goggomobil Dart , had a two-cylinder Sachs engine with locked gearbox. The design of his body was based on the frisky of the British manufacturer Henry Meadows (Vehicles) Ltd. The car with fiberglass body weighed 400 kg and had 10 "wheels with drum brakes all around. Like the dart, the car had neither doors nor bumpers.

Not only the peculiar construction, but also a bad timing contributed to the commercial failure of the car: it was introduced at the same time as the Morris Mini , which was only AU £ 60 more expensive than the Zeta. Therefore, from 1963 to 1965 only 363 vehicles were sold, in which the Zeta Sports are already included.