Australian Automotive manufacturer Melbourne. From 1898 to 1901 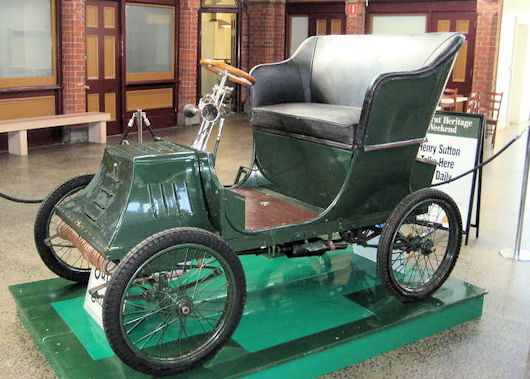 Sutton's Cycle Agency was an Australian manufacturer of automobiles from the late 1890s .

The company from Melbourne began in 1898 under the direction of Henry Sutton with the production of automobiles. The brand name was Sutton . 1901 ended production. Overall, only a few vehicles made.

Sutton made in 1898 a tricycle with a two-cylinder engine .

1899 followed by a four-wheeled small car. An air-cooled single-cylinder engine with 4 HP power drove over chains the front wheels. The steering acted on all four wheels depending on the source or only on the rear wheels. The open body could accommodate two people. above the motor a further seat could be mounted.

1901 followed by a model with a water-cooled engine with 1565 cc capacity and 6 horsepower.  The tonneau body could accommodate four people. The front wheels were steered.