Australian Automotive manufacturer From 1971 to 1984 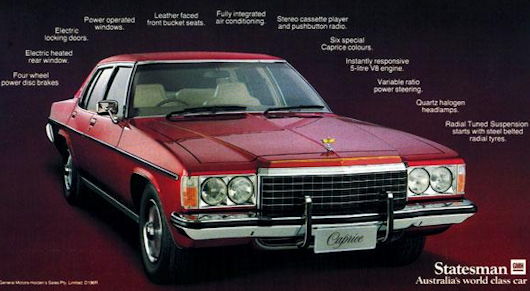 Statesman was a car brand of General Motors , which was produced for the Australian market from mid-1971 to late 1984 . The only Statesman Custom , Statesman De Ville and Statesman Caprice were luxury-class sedans.

In July 1971 Holden introduced as the successor to the Holden Brougham the new Statesman HQ in the versions Statesman Custom and Statesman De Ville exclusively as a four-door sedan. Engine ratings ranged from a 3.3-L R6 to a 4.15-l and a 5.0-liter V8 to a 5.7-liter V8 gasoline engine. The 5.7-liter versions were exported to New Zealand and South Africa under the names Chevrolet 350. Technically, the Statesman models were based on the standard Holden HQ models, but had a wheelbase extended by 7.6 cm, which benefited the rear space, and a modified body.

In October 1974, the model line got a first boost as Statesman HJ . Base model was now the Statesman De Ville , the luxury version called Statesman Caprice and received a different design grille. The six-cylinder accounted for.

The Statesman Caprice competed against the new Ford LTD , introduced in 1973 , an extended Australian Fairlane with luxurious features.

Of the Statesman models of the HJ series a total of 8,383 copies were created.

In July 1976, the Statesman HX got a modified radiator grille and a weaker five-liter V8.

The Statesman HZ received minor cosmetic modifications in November 1977 and, like all Holden models, a modified radial tire tuned suspension.

In 1979, a Statesman SL / E with its own radiator grille as a mid-size model added the Statesman de Ville and the Caprice.

In May 1980, a major facelift , which brought the Statesman WB a new body with three side windows. Of the WB models, a total of 60,231 pieces were produced.

The Holden base models were replaced at the same time by vehicles derived from the German Opel Commodore ; the only "real" big Holden next to the utility - Pickup the Statesman remained until December 1984 at the offer.

After that, GM had no upper class sedans on the Australian market until the names Statesman and Caprice were revived in 1990, this time as Holden models.