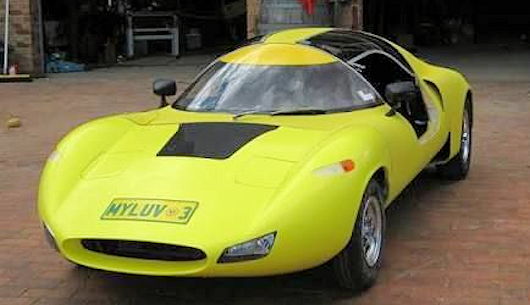 The Pellandini Cars Pty ltd. was an Australian sports car manufacturer in the 1970s.

From 1970 to 1978 built by the Englishman Peter Pellandine in Cherry Gardens South Australia.

First, a winding mid-engined coupe with gullwing doors was built, powered by a four-cylinder in - line engine from the Mini with 1098 cc or 1275 cc displacement. The car was equipped with 10 "aluminum rims on the front axle and 12" aluminum rims on the rear axle. Body and integrated chassis were made of GRP, The suspension points for the chassis and engine were individually laminated into the chassis when the corresponding parts were installed. The seats were parts of the chassis and thus not adjustable. Instead, the pedals were adjusted to the driver. The steering was also screwed onto the GFK chassis. The car weighed 480 kg and accelerated in 5 seconds from 0-100 km / h. He had a one-piece, front-hinged front hood, which included the radiator and the spare wheel in addition to the fenders.

In 1974, Pellandine also offered a roadster version , which turned out to be little in demand. A total of seven coupes were sold. Some of these vehicles still exist today, but most were destroyed in racing accidents.

In 1978, Pellandini Cars was dissolved as Pellandine returned to the UK . There he built two more models in his new company Pelland Engineering . Both had a fiberglass monocoque chassis and mid-engine. 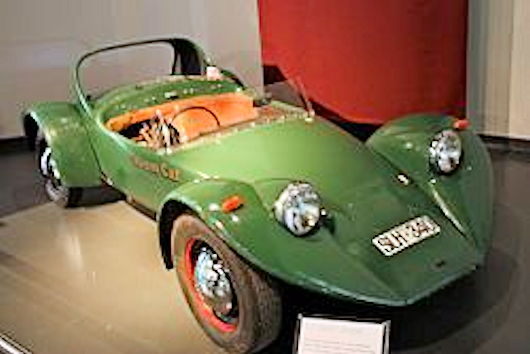 The Pellandini Sports was the basis for Pellandini's first steam car , the Steam Cat . It had the same monocoque chassis and was powered by a steam engine with two double-acting cylinders delivering 40 bhp (29 kW). This steam engine was installed at the back and the condenser was a rear wing. Pellandine's design was based on a project by the South Australian government aimed at building a practical steam car. This steam car is now in the National Motor Museum in Birdwood South Australia

In 1977 he created the Pellandini Steam Cat Mark II. He had a steam engine with three double-acting cylinders in the shape of a wide arrow. This machine was installed in a tubular frame chassis and covered with a Kevlar body. The car weighed only 475 kg. He was straightforward, robust and reliable. The steam engine offered a high torque of 1,500 Nm at 0 rpm and accelerated the car from 0-100 km / h in less than 8 seconds.

Pellandine wanted to break the speed world record for steam-powered land vehicles, which stood at 205.45 km / h. He tried this several times, but was thrown back again and again by technical problems. The last attempt - already in the UK - was in 1991. Subsequently, the historic car was sold at Christie's and can be visited at the Lakeland Motor Museum at Holker Hall in Cark-in-Cartmel , County Cumbria .

In the 1990s, Pellandine returned to Australia to develop the steam car. The last version is the Mark IV.