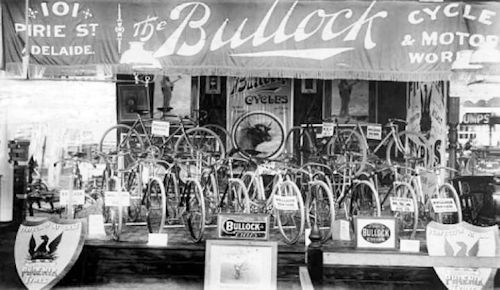 Bullock Cycle & Motor Works was an Australian manufacturer of bicycles , motorcycles and automobiles .

The Adelaide company originally made bicycles. 1901 began under the direction of John Bullock, the production of automobiles, which ended in 1902. The brand name was Bullock . Motorcycles were created over several years.

1901 appeared a light two-seater, in which the seats were arranged side by side. An air-cooled engine with 2.75 hp powered the vehicle. The maximum speedwas stated at 20 km / h.

1902 followed a vehicle with a water-cooled engine came from De Dion-Bouton and made 4 hp. The transmission had two gears.