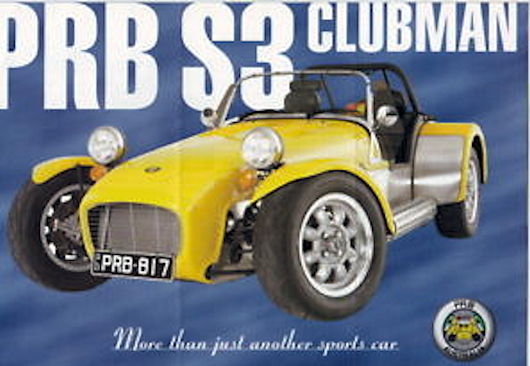 PRB Motors is an Australian car manufacturer. Founded in 1978 by Peter Raymond Bladwell company Sport roadster, mainly based on Colin Chapman's Lotus Seven , built. The seat was initially in Drummoyne and now in Greenacre , both at Sydney .

The first PRB was delivered to John Ribeiro , a racing driver from Canberra , who won in 1978 the hill-tribe championship of New South Wales . Today, there are several hundred PRB Clubman on Australian roads. The cars are successful in motorsport competitions. In optimized cars an acceleration of 4 s from 0-100 km / h is achievable.

The current PRB Clubman has a monocoque chassis made of aluminum in sandwich honeycomb core construction . The car is only available as a kit ( kit car ) available and must be mounted by the purchaser or the local PRB dealer. The aluminum construction makes the car lighter and more stable.

The PRB S3 differs from many other Australian kit cars in that it mainly uses new parts, many of which are specifically made for the S3 model. The latest model can be equipped with engines from the Ford Focus , Toyota Celica or  for racing purposes  the Toyota 1.6 l-4AGE engine .