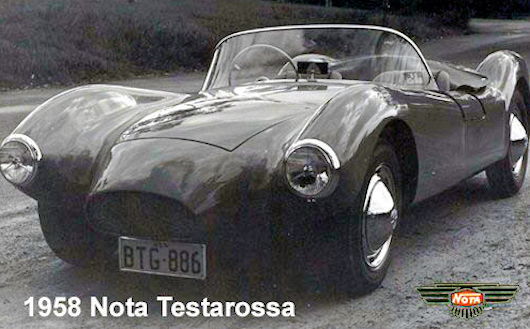 Nota Sports and Racing Cars , formerly Nota Engineering Company , is an Australian automaker based in Dural (New South Wales) . The company was founded in 1952 by Guy Buckingham and was initially based in Parramatta .

Buckingham was an aircraft engineer and used his skills to build sports cars with lattice frames , probably the first cars with this frame type in Australia. In 1958, the company produced a series of aluminum-clad, aerodynamically shaped sports cars. First these cars were called Streamliner , later Mazengarb . By 1960, created eleven of these vehicles. In the late 1950s, the company also produced racing cars for the Formula Junior . 1963 began with the construction of sports cars based on the Mini . From 1964 the Sapphire was built. In 1965, the production of racing cars for Formula V started . The sportsman , a Lotus 7 clone, released in the 1960s. In 1968 came the catch , the most successful model, of which over 100 pieces were built. In 1973, Nota began building the Marauder series . The mechanics of the Marauder initially corresponded to that of Fang a british design, but in 1974 the Levanti came out with front engine. In 1975, the delivery of 1275 GT engines by Leyland ended and so Nota turned to Fiat . The Marauder and Fang models have since been delivered with Lancia 2.0l twin camshaft engines .

In the late 1970s, Nota launched a four-wheel drive Marauder and 5752 cc V8 engine from Ford , but in the 1980s, Ford stopped delivering these engines to Australia. After a trip to England, Buckingham formed a team that designed a catch with a four-cam 3.0-liter V6 Formula One engine that, like the comparable Chimera , was fully clad. In 2003, the Le Mans appeared , powered by a 1.3-liter four-cylinder engine from the Suzuki GTi or a 1.1-liter engine from a Suzuki motorcycle. For use on the road, the car could also with a 1.8-liter engine from Toyota be equipped with six-speed gearbox or a 3.0-l V6 engine with four camshafts.