Australian Motor Industries (AMI) was an automobile assembly firm that was significant in the early history of the automotive industry in Australia.

Import tariffs on vehicles encouraged the growth of the Australian vehicle body building industry from the early 1920s. The tax concessions varied with the degree of local content.

Changes within the industry saw the consolidation of the principal manufacturers and the demise of the smaller body builders. The Port Melbourne assembly plant was one of many new facilities which were set up to meet the post war demand for new vehicles. By 1955 the assembly complex had expanded to 33 acres (0.13 km2; 0.052 sq mi) of land and the new engine assembly plant had a capacity of 100 engines per eight-hour shift.

Standard Motor Products Ltd was unusual in the Australian motor industry because of the high Australian shareholding of the company; 88% in 1952 when the Australian company bought out its English partner. The remaining shares were held by the Standard Motor Company UK. As a sign of the close co-operation between the two companies, Sir John Black was made president of SMP and Arthur F. Crosby remained as chairman. His brother, Clive C. Crosby, became the managing director.

Through its long association with the Standard Motor Company, AMI also held the franchise for Triumph cars and assembled Ferguson tractors through another subsidiary company of the group, British Farm Equipment. An extensive dealer network throughout NSW and Victoria saw Standard cars and Ferguson tractors sold side by side in country areas. The most popular car sold was the Vanguard model. 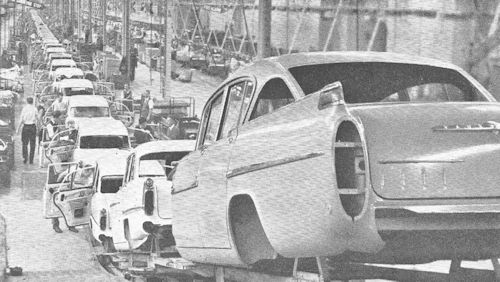 In October 1960, AMI signed an agreement with American Motors Corporation (AMC) to assemble the Rambler range of cars from complete knock down (CKD) kits. Another deal with Fiat was planned to replace the Ferguson tractors distributed by BFE. The Standard Motor Company had sold their tractor facility in Coventry to Massey Ferguson and focused on automobile production.

AMI ran into financial trouble during the Australian credit squeeze of 1961 and the company was forced to sell off many assets and vehicle stock to remain solvent. Part of the restructure resulted in the sale of their share in the Mercedes Benz franchise to the German parent company.

In 1963 the company secured the Australian franchise for Toyota cars and began assembly of the Tiara range. From this point the financial position of the company steadily improved and by 1967 AMI was assembling 32 different models for the Australian market, as well as importing fully assembled Toyota Corollas for their dealer network.

Other cars assembled by AMI included the Rambler range from American Motors and Triumph cars from Leyland Motors. Leyland had inherited shares in AMI when it had merged with Standard-Triumph International in 1961. During the early 1960s the foreign share of the automobile motor vehicle market was estimated to be 95%, and as the only sizeable producer with a local equity, AMI continued to manufacture overseas designs.

By 1965, the demise of the Standard Vanguard and the loss of assembly rights for Mercedes-Benz vehicles left AMI with additional capacity to assemble Rambler, Triumph, and Toyota models.

Starting in 1960, AMI assembled a broad range of AMC cars, all with right-hand drive and carried the Rambler brand name. This meant that Australians could purchase a Rambler Javelin, AMX, Hornet, Rebel, or Matador long after the Rambler marque was dropped from use on the equivalent U.S.-market models.

Complete knock down kits were shipped from AMC's Kenosha, Wisconsin facility (all knock-down kits to all assembly operations were from Kenosha), but the Australian cars were assembled with a percentage of "local content" to gain tariff concessions. This was done using parts and components (such as seats, carpet, lights, and heaters) from local Australian suppliers. AMI specified what parts were not to be included in the unassembled kits sent by AMC. Other necessary parts specified by the assembler were boxed and shipped for assembly at the final destination in Australia. It is unknown exactly how many parts were included to be installed by the assembly operation, that varied with each operation. Outside colors were chosen by AMI and were the same as used on AMI assembled Triumph and Toyota cars of that period. The distinctive AMI exterior emblems were used on Ramblers, as well as Triumph and Toyota cars assembled by AMI from 1968 onward.

A total of 24 AMC AMXs, all 1969 models were made by AMI between August, 1969 and July, 1970. All featured the 343 cu in (5.6 L) V8s . Differences to the RHD two-seater AMXs compared to the U.S. models included swapping the power brake booster and heater motor on the firewall, the power steering pump remained in its usual left location, although the rest of the steering components had to be on the right side of the cars. All of the Australian AMX interiors were finished in black featuring a unique RHD dashboard with a wood-grained instrument cluster in front of the driver. While the AMX was marketed as a performance muscle car in the U.S. marketplace, the Australian AMXs came with a large high level of equipment that was optional in the U.S., and these AMXs were advertised as personal luxury cars.

One AMC Gremlin was also assembled AMI in Port Melbourne for evaluation purposes and branded as a "Rambler Gremlin". The car features the standard 232 cu in (3.8 L) I6 engine with three-speed manual transmission, as well as right-hand drive and the mandated percentage of locally produced content.

From 1971, Australian assembled Matadors were equipped with standard column shift automatic transmissions, power steering, power windows, air conditioning, and an AM radio. The engine in the later years was AMC's 360 cu in (5.9 L) V8. Options included exterior sunvisor, vinyl roof cover, tow hitch, and mud flaps. Registrations for AMC vehicles dropped after 1974. A total of 118 Hornets and 145 Matadors (118 sedans, 27 wagons) were sold during 1974. Registrations for 1975 were 136 Hornets and 118 Matadors (85 sedans 33 wagons). In 1976 there were 88 Matadors (78 sedans, 10 wagons), while 1977 saw just 24 Matador sedans and 3 wagons. Additionally, Matador coupe CKD kits arrived in late-1974, and the assembly of 80 cars began in 1976. One fully assembled AMC Pacer was imported for evaluation purposes.

American Motors cars were assembled in Port Melbourne by AMI up to 1978. The company retained a niche market as the sole U.S. sourced cars available in the Australian marketplace. For example, the Government of New South Wales selected the Rambler Rebel and the Matador as official vehicles in the 1970s.

The first Toyota car ever built outside Japan was assembled by AMI in April 1963, the Toyota Tiara. The AMI production of Toyotas expanded in the 1960s to also include the Crown, Corona, and Corolla assembled at AMI's Port Melbourne factory. Toyota Motor Corporation of Japan purchased 10% of outstanding AMI shares. As a fast-growing company, took a controlling interest in AMI in 1968 as a contract with the British Leyland ended. Toyota also purchased a 40% share in Thiess Holdings, an importer of light commercial vehicles, which it renamed Thiess Toyota.

Recognizing the majority owner of the company and the products that it manufactured and marketed, AMI renamed itself as AMI Toyota Ltd in 1985. The company continued to be listed on the Australian Stock Exchange with a minority Australian shareholding until 1987, when Toyota moved to acquire the shares held by the remaining shareholders.

Toyota vehicle production was transferred from the historic Port Melbourne factory to the company’s new $420 million facility at Altona, Victoria in 1994. The Australian facility now exports CKD kits to assembly plants in Thailand, Malaysia, Indonesia, Vietnam, and the Philippines.