The Opel 1.2 liters was a car model of the Adam Opel AG , which was produced as a successor of the Opel 4/12 hp ("tree frog") from July 1931 to September 1935. After earlier Opel cars still the indication of the tax horsepower in the model designation, after the takeover of Opel by General Motors in the USA together with GM newly developed vehicle only after that the cubic capacity named to models.

Six months after the presentation of the larger six-cylinder Opel 1.8 liter model , the 1.2-liter four-cylinder was introduced in mid-1931 as the second new Opel model, directed by General Motors. The technology of both vehicles was conventional: rear-wheel drive , side - mounted inline engine , ladder frame made of pressed U-profiles, rigid axles front and rear and cable-operated drum brakes . Both rigid axles hung on semi-elliptic leaf springs and had hydraulic shock absorbers . The latter was new at Opel in this class. In Rüsselsheim 101,563 vehicles of the Opel type 1.2 liters were built until the appearance of the successor Opel P4 in September 1935. Under the impression of the world economic crisis came in November 1932 with the same body and smaller engine, the Opel 1 liter on the market, but disappeared after almost a year back from the Opel range.

The Opel 1.2 liters was equipped with three different body constructions available as a two-door sedan , convertible and convertible saloon , where a chassis with two versions with 2286 mm (90  inches) or 2337 mm (92 inches) wheelbase available. The Opel internal type numbers were accordingly: 1290 and 1292, d. H. 1.2-liter engine and 90 or 92 inch wheelbase. There was also the LL chassis (long chassis vans) with 2445 mm wheelbase.

The four-cylinder engine was a further development of the 1.1-liter engine in the predecessor model "tree frog" (Opel 4/12 hp) and had instead of 1018 cc a displacement of 1186 cc ( bore × stroke : 65 mm × 90 mm). As before, it was "side-controlled" ( upright valves ) and powered by a single carburetor . With an output of 22 hp (16.2 kW) at 3200 rpm, he was able to accelerate the car up to 80 km / h, with only 9.0 liters of fuel consumed per 100 km - a low value for the time.In 1933, the model received some detail improvements. The engine power was slightly higher with 23 hp (16.9 kW). The three-speed gearbox was replaced by one with four gears. The maximum speed rose to 85 km / h. End of 1932 was the 1.2 liter smaller model 1 liter with 18-horsepower engine aside, but this was set back in late 1933.The power was transmitted via a single-disc dry clutch , an unsynchronized three-speed manual transmission , a cardan shaft and a differential gear to the rear wheels.

In January 1934 appeared in addition to the Opel 1.3 liters with a new, torsion-resistant frame of closed box sections with cross beam, a streamlined body with externally accessible trunk and hydraulically operated brakes. The previous front axle replaced an independent suspension with " Dubonnet suspension ": This construction consisted of a rigid tube, at both ends of each a round housing with a horizontal coil spring and a telescopic shock absorber was mounted horizontally rotatable. Each of the two housings, which swiveled left or right with the steering, carried a pushed rocker arm (similar to motorcycles) that acted on the spring as it bounced.

The 1.2 liters remained until autumn 1935 in production and was replaced by the Opel P4 . 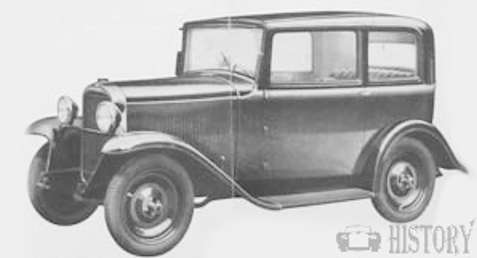