In September 1991, the production of the first series of the Opel Frontera started; Market launch was in February 1992 This series was known in the United Kingdom as the Vauxhall Frontera The Australian and New Zealand version of the model range was known as the Holden Frontera. From the beginning there was the Frontera as a five-door model with 2.4-liter gasoline engine and the Frontera Sport with 2.0-liter gasoline engine as a three-door variant. The 2.3-l turbo diesel engine was only available for the four-door model. Optionally, there was the sport with hard or soft top with convertible flair. Initially, the Frontera was delivered with engines of the Opel Omega .

At the beginning of 1995 there was the first facelift for the Frontera. The engines were 2.2-i-16V instead of the 2.4-i and from mid-1996 the 2.5-TDS instead of the offered for about a year 2.8-TDi and its predecessor the 2.3-TD introduced. In addition, the Frontera got a new suspension and a new cockpit, including airbags. The spare wheel was now attached to the five-door directly to the right-wing tailgate. The sports model was always attached to the tailgate. In order to get access to the trunk from behind, first the spare tire bar had to be swung to the right. Then the rear window could be opened upwards and the tailgate folded down.

The Frontera was based on the Isuzu MU and built at the former Bedford van factory in Luton In the summer of 1998, the production of the Frontera A was discontinued. 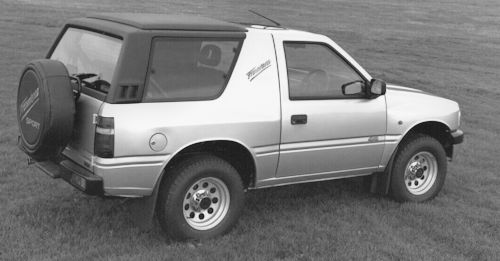