STP Oil Advertising from the 1960s 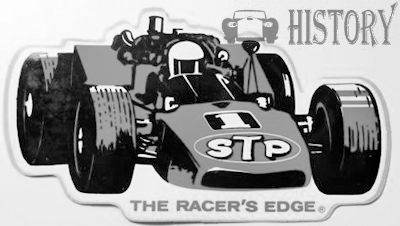 Chemical Compounds was founded in 1953 by three businessmen, Charles Dwight (Doc) Liggett, Jim Hall and Robert De Hart, with $3,000 in start-up capital inSaint Joseph, Missouri. Their sole product was STP Oil Treatment, the name was derived from “Scientifically Treated Petroleum”. In 1961, the company was acquired by the Studebaker-Packard Corporation.

Studebaker briefly tied STP into its advertising as an abbreviation for “Studebaker Tested Products”. However, Studebaker-Packard CEO Sherwood Egbert felt that STP could one day outpace its parent company and recruited Andy Granatelli as the CEO of STP to help raise the product’s image. At the same time, Granatelli became the public face of STP, often wearing a white suit emblazoned with the red oval STP logo to races, distributing thousands of all-weather STP stickers. Granatelli ran two Novi specials at the 1964 Indianapolis 500. Jim Hurtubise and Bobby Unser were the drivers. There was a film made of the race centering on the Novis.

When Studebaker abandoned auto manufacturing in 1966 to become Studebaker-Worthington, STP sales continued to climb to the point where it was spun off into a publicly traded company in 1969