Automotive manufacturer of Heilbronn; Germany from 1934 to 1973. 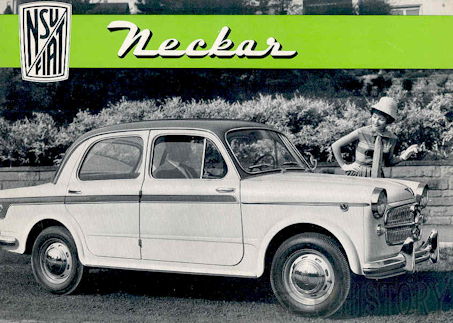 NSU-Fiat was a sales and license production company for Fiat cars in Germany . The United Fahrzeugwerke AG Neckarsulm by the forced takeover of Schebera automotive Werke AG in Berlin had come into financial difficulties were, by the Italian Fiat Group and Dresdner Bank supported. In the summer of 1929, NSU Automobil AG was founded with a stock value of 2.0 million RM , which took over the new Heilbronn plant and some NSU 7/34 PS cars from NSU . Of these, NSU existed independently in Neckarsulm further, which later led to name conflicts.

In 1934, for the first time, a NSU Fiat 1000 was released from its own production, which was a license version of the Italian Fiat 508 Balilla . Like the Italian original, the car also received a 1100 cc engine in 1938. 1936 came the NSU Fiat 1500 and 1937 the NSU Fiat 500, also Italian licensed products, to. By the way, also Fiat cars from Italian production were distributed in Germany. In 1941, the company ceased its activities due to the war.

In 1958, NSU in Neckarsulm began production of the NSU Prinz . Thus, there were two cars from different manufacturers with the same brand on the German market. Following a dispute between FIAT and NSU, an amicable settlement was reached in October 1959. On January 1, 1960, called NSU Automobile AGnow Neckar automotive Werke AG Heilbronn, vorm. NSU Automobile AG . On September 1, 1966, the brand name NSU was renounced altogether. 1968 also the name Neckar disappeared .

In 1973, the company finally ceased automobile production. The German sales company of Fiat had until 2006 in Heilbronn its headquarters and continues to be present there, although the headquarters was relocated to Frankfurt at the end of 2007.