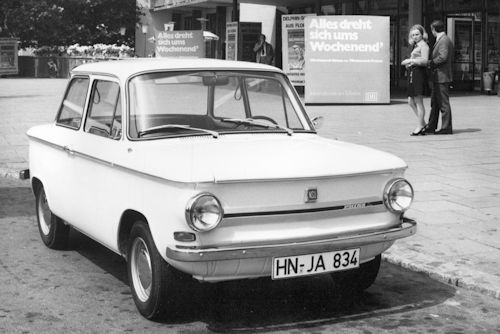 NSU was a German bicycle , motorcycle , automobile and scooter manufacturer, founded in 1873 in Riedlingen by Christian Schmidt and Heinrich Stoll and relocated to Neckarsulm in 1880 .

The company was originally known as "mechanical workshop for the production of knitting machines", but made from 1886 ago and was from 1901 instrumental in the early development of motorcycles in Germany involved. In the mid-1950s, NSU was the largest two-wheeler manufacturer in the world in terms of quantities.

The name NSU , which was used from 1892 as a brand name or trademark, is a short name for the city name Neckarsulm , which in turn derives from the two rivers Neckar and Sulm , which flow together here. For the company logo was initially borrowed from the Württemberg State coat of arms of 1806, one of the three lying deer stakes and between their four tines the letters N, S, U registered. Contrary to widespread misbelief, the name NSU is not derived from "Näh- und Strickmaschinen-Union" or "Neckarsulm Knitwear Union".

The company was founded in 1873 by Christian Schmidt and Heinrich Stoll in Riedlingen on the Danube . Originally they made knitting machines, hence the name "mechanical workshop for the production of knitting machines". In 1880, the company moved its headquarters to Neckarsulm near Heilbronn in a former sawmill and gypsum mill (Brunnersche mill) on the Sulm . The reason was the higher space and energy requirements. Christian Schmidt died at the age of 39 in February 1884. On April 27, 1884, the company was converted into a public limited company and was called from thereNeckarsulm Knitting Machine Factory AG .

The bicycle production began in 1886. Germania was the first high-wheel of NSU, later also followed low-wheels such as in 1888 the safety two-wheeler "arrow". From 1892 no more knitting machines were produced.

The enterprise called itself 1897 "Neckarsulmer bicycle works AG". From 1901 motorcycles were also produced. The engine with 211 cc, a single-cylinder four-stroke engine, came from Zedel . The first "Neckarsulm motorcycle" (as the inscription on the tank) with an output of about 1.25 hp reached a top speed of almost 40 km / h. From 1904/05 the motorcycles were called "N. S. U. "

1906 began after the three-wheeled "Sulmobil" the development of automobiles with the name "Neckarsulm motor car". Starting from 1913 the enterprise firmierte as "Neckarsulmer vehicle works AG" and "NSU" (without points) became official mark. The company employed about 1,200 workers in 1913 and produced around 13,000 bicycles and 2,500 motorcycles. Before the First World War, NSU was the largest exporting German motorbike factory and exported mainly to Russia, many European countries, Scandinavia, Turkey and Brazil. With the outbreak of the First World War in 1914, for the army, among other things, a 3.5-horsepower war motorcycle and trucks were manufactured with 1.25 and 2.5 tonnes payload.

Due to the good development of the demand for automobiles, NSU decided to build another car plant, which was built in 1925 in the neighboring town of Heilbronn . In 1926 merged with the standing to bankruptcy Berlin Coachbuilder Carosseriewerke Schebera AG for NSU United Fahrzeugwerke AG Neckarsulm . The acquisition caused NSU economic problems, and after the Berlin companies had to be sold to the Heilbronn plant, which was taken over in 1928 by Fiat and incorporated into the newly founded NSU-Automobil AG Heilbronn (which existed next to the NSU in Neckarsulm, see NSU-Fiat). In 1932 NSU had to give up the car production and broke away from Fiat, which continue to operate the Heilbronn plant alone.

NSU achieved with the 1927-1929 produced motorcycles Model 501 T and the luxury version, the 501 L, a high profile. The reliability of the 501er models led to the designation "Neckarsulmer tractor". To promote the motorcycle sales NSU formed in July 1932 with the German Industriewerke AG from Berlin (D-Rad) until 1938 a manufacturing and sales community under the name NSU D-Rad Vereinigte Fahrzeugwerke AG Neckarsulm , recognizable by the large D in the lower part of the logo ,

After Otto Reitz, the chief designer of NSU, in 1930 by the former designer of Norton Motors Ltd. (England), Walter William Moore , the designs and model designs changed radically. After the successes of the super sports models 500 SS and 600 SS soon came the series models 201, 251, 351, 501, 601 OSL and 351 OT on the market. Similarities with models of Norton arose from the fact that Moore brought experiences and constructions from the English motorcycle construction. For example, on OSL models with foot control, the shift lever is on the right side. Likewise, the Kickstarterto find on this page. Also, the vulnerabilities are similar to the English models of Norton: occasionally oil leaks and vulnerable carburetor (AMAL carburetor).

Second man in the construction according to Moore 1936-1938 Albert Roder , who, however, in 1938 to Victoria to Nuremberg went there to be chief designer. Moore returned to England before the outbreak of war in 1939.

During World War II, the Neckarsulm plant produced the well-known Kettenkrad type HK 101, a half-track vehicle with a motorcycle fork. It was produced during the war for the Wehrmacht and after the end of the war for agriculture and forestry. The engine came from the car Opel Olympia , because NSU had no strong enough aggregate in the program.

The NSU works went from World War II not only partially destroyed, but also financially very bad. The administration was initially carried out by trustees. One of them, Eduard Hilger,  even advocated closure or transformation into a cooperative, when in 1946 there was little cash available and the plant continued to make losses. As of July 1, 1946, Walter Egon Niegensch was responsible for the fortunes of NSU as General Director, having been acting director for a short time with the approval of the Military Government and the Asset Control Office. Niegtsch managed to give the company a new perspective within a short time. He realized that sporting achievements were an excellent advertisement for the products of the house and ensured that NSU got involved again in racing. The small series of the Sport Fox with 98 cc engine was created on his initiative. Niegensch's work at NSU, however, was short-lived; He died on May 29, 1951 after a short illness.

In 1946, Albert Roder returned to NSU and took over the vacant post of chief designer.

In the years 1951 to 1954, small Italian motorcycle manufacturers bought the then modern NSU Fox engines and thus built their motorcycles in small series.

Under the leadership of General Director and CEO Gerd Stieler von Heydekampf , NSU was the largest two-wheeler manufacturer in the world in the mid-1950s, with just under 350,000 two-wheelers (1955) (see table overview ). The vehicles built by around 6600 employees were exported to 90 countries.

NSU motorcycles were at home on many racetracks and drove numerous titles and world records in the 1950s and partly in the 1960s. The duels between Heiner Fleischmann (NSU) and Georg "Schorsch" Meier (BMW) wrote in the post-war motorcycle racing history, as well Wilhelm Herz , Werner Haas , the 1954 mortally killed Rupert Hollaus and the sidecar team Hermann Böhm / Karl Fuchs. A strong advertising effect had 1950 also the use of the Thouret women's trio with Ilse Thouret and her daughters Elga and Anneliese with NSU Lambrettas at national rallies .

Motorcycle production ended with the motorbike shaft quitting in 1963, the production of bicycles in the mid-1960s. NSU motorcycles were produced for several years in Yugoslavia by Preduzece Tito Sarajevo and marketed as NSU Pretis.

1953 developed the NSU works AG their first postwar car, the NSU Prinz , first as a three-wheeled cabin scooter with the engine of the Max motorcycle, then as a four-wheeled car with a (also derived from the Max engine) 583 cc two-cylinder rear engine and 20 hp (15 kW). In 1957 the car was presented at the IAA . He was followed in 1961 by the Prince 4 in the typical "bathtub design", which offered a good space economy. In 1959, the sports prince came on the market with the technology of Prince II or III (30-horsepower engine). The NSU sports prince was a sporty coupe with two seats; the so-called emergency seat in the rear was just a thin padded board. The body with hatchback had designed Bertone .

On the basis of the Sportprinz was the 1963 presented NSU Wankel-Spider, the world's first automobile with a rotary piston engine. Externally, the Spider differed from the Sportprinz by a convertible top and the air intakes at the front for the front mounted radiator.

The racing did not let even the car area into account. Even the Prince 4 was able to compete in rallies, there were greater success with the Prinz 1000, the 1200 TT and the 1000 TTS , with a transverse air-cooled OHC four-cylinder in the rear , this time with a chain drive for the camshaft . These vehicles were conceived as sport sedans with a favorable power to weight the later concept of the VW Golf GTI anticipated. Thus, the 1000 TTS from 998 cc engine as standard got 70 hp (51 kW, VW Beetle 34 hp = ~ 25 kW), tuned also over 85 hp (62 kW). This corresponded to the engine performance of upper middle class and upper class vehicles, but the vehicle weighed less than 700 kg. Because of their agility, the TTS were particularly successful in the slalom competitions, long after their production was discontinued.

Also famous were the NSU Wankel-Spider (1964), the first motor vehicle with Wankel engine , and the NSU Ro80 (1967), a sedan of the upper middle class with Wankel engine, directional wedge shape design of Claus Luthe and for that time very favorable flow resistance coefficient of 0 , 35th

On August 21, 1969 merged the then NSU AG and belonging to the Volkswagen Group Auto Union GmbH , based in Ingolstadt to Audi NSU Auto Union AG based in Neckarsulm. The K 70, which had just been developed at the time, was taken over by Volkswagen and built as the VW K 70 .

After the closure of the plant in Neckarsulm had been decided in 1975, a protest march to Heilbronn developed on April 18, 1975 from a protest rally of the IG Metall at a factory gate, in which 7,000 of the 10,500 employees participated. As a result, the closure could be prevented. Nevertheless, 4,500 jobs have been canceled.

In 1985 it was renamed Audi AG , the name NSU disappeared from the company . The stock market symbol for the stock of Audi AG is still NSU, since today's Audi AG is purely legally nothing more than the multiple renamed NSU AG. The seat was moved to Ingolstadt in Bavaria.

In October 2005, one of the last old buildings of NSU Motorenwerke - the "NSU Casino" - was demolished, as it had to make way for a SE center. Also in the picture from July 2005, it is still reflected - almost symbolically - in the upper right corner of the façade of the Audi Forum , which faces Christian-Schmidt-Platz exactly.

Today's NSU GmbH - the traditional company of Audi AG - is an Audi subsidiary and was founded in 1985 to cultivate the tradition of the Neckarsulm location .

On September 30 and October 1, 2006, the Audi plant in Neckarsulm celebrated the 100th anniversary of automobile construction in Neckarsulm with an open day . The production of the new sports car Audi R8 (resulting from the Le Mans study) was also started with this anniversary celebration .