The Nissan Juke is a sport utility vehicle of the Japanese automobile manufacturer Nissan . Built since 2010 in the English plant of Nissan Motor Manufacturing (UK) Ltd, on a platform of the Renault-Nissan built Allianz. In the Euro NCAP crash test 5 Stars out of 5.

At the Geneva Motor Show 2009, a near-series study of the Juke as Nissan Qazana was presented. The production version was introduced in October 2010.

Since October 2014, a modification of the Nissan Juke is offered in China as Infiniti ESQ .As of early 2013, there was the Nissan Juke Nismo , which makes 147 kW (200 hp) and 250 Nm with a performance-enhanced 1.6-liter turbo engine. The front-wheel drive variant of the Juke Nismo accelerates in 7.8 seconds from 0 to 100 km / h and reaches a top speed of 215 km / h. The also available four-wheel drive variant requires 8.2 seconds and runs exactly 200 km / h .At the Geneva Motor Show 2014 the model update was presented; Since then, a large glass sunroof was available. 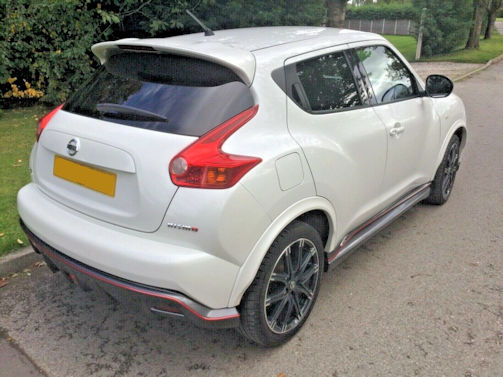 The hitherto most powerful version of the Juke was presented end of 2014: The Juke Nismo RS with a 1.6 liter turbocharged gasoline engine to now 160 kW (218 hp) and 280 Nm. The diameter of its front brake discs is 320 mm. The launch of the Nismo RS took place on 17 January 2015.There were also special models such as 2012 3,000 copies of the Ministry of Sound . By mid-October 2019, about one million Jukes were sold worldwide.