Automotive manufacturer of Wellington , New Zealand From 1984 on. 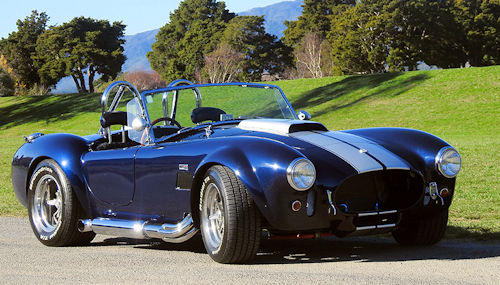 Almac Cars is a New Zealand manufacturer of automobiles and kits . The brand name is Almac .

Alex McDonald founded the company in Wellington in 1984 . He started in 1985 with the production of automobiles and kit cars with over 300 cars manufactured.

The first model was the 427 SC . This is the replica of the AC Cobra . Various V8 engines from Chevrolet and Ford with some 7000 cc of displacement drive the vehicles. While the front suspension comes from the Holden Torana , the rear suspension is from Jaguar .

1986 followed a smaller model, which was first called TC and later TG . It was based on the chassis of the Triumph Herald . On it a one-piece body made of fiberglass . Visually, the vehicle resembled the MG T-Type .

In 1995, the Saber appeared , which was offered only as a complete vehicle. This roadster was based on the Ford Cortina , but had a V8 engine. The club sprint is similar to the Lotus Seven . The Clubsprint XL is a bit bigger.