Automotive manufacturer of Netherlands from 1978 on 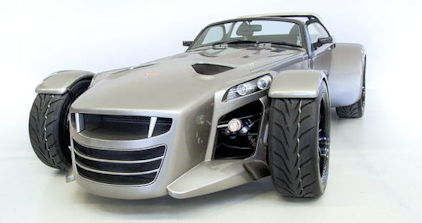 Donkervoort is a car manufacturer based in the Netherlands . The company was founded by the Dutchman Joop Donkervoort in 1978 and produces only roadsters that were originally derived from the Lotus Seven and look similar to that today.

Donkervoort builds new complete vehicles in Lelystad by hand. The vehicle type Donkervoort D8 was redesigned by the founder Joop Donkervoort and has, apart from external similarities, with the initial model Lotus Super 7 meanwhile no more in common. Donkervoort uses materials such as carbon fiber reinforced plastic (CfK) and other modern composites for its cars. The current engine is supplied by Audi (2.5 l TFSI five-cylinder turbo engines). The performance of the new 2.5-liter five-cylinder engine ranges from 250 to 280 kW (340-380 hp) as standard.

Thanks to the extremely low weight of the Donkervoort vehicles accelerations from 2.8 s to 100 km / h (Donkervoort D8 GTO) as well as extreme cornering speeds and decelerations are possible.

The car has neither an Anti-lock Braking System (ABS) nor an Electronic Stability Program (ESP). Only an adjustable traction control, full throttle function and launch control are offered as an option. 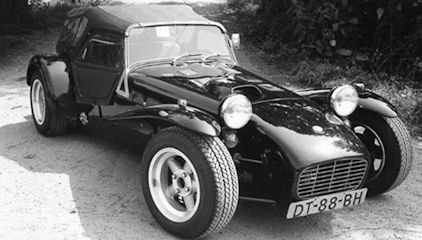 Introduced in late 1983, the S8 and later S8A were the first Donkervoorts of notice, with the "Eight" implying an improvement over the Lotus Seven. Of exactly the same dimensions as the Donkervoort Super Seven, these cars originally used a two-liter inline-four engine from Ford of Europe.

Responding to the need for more power, a turbocharged version of the S8 soon appeared; this car is identifiable by a profusion of various vents and openings to cool the engine.

This sleek, minimalist version was built in a very limited series of ten to celebrate Donkervoort's tenth anniversary in 1988. The cars lacked a spare wheel as well as a windshield, but benefitted from an enlarged (2,160 cc) version of the Ford engine with a bigger Garrett T3 turbocharger, producing 190 PS (140 kW). The last car was only built in 1994, with some of the later examples receiving Cosworth engines with up to 300 PS (221 kW).

From 1993 the new D8 was built, marking the continuing departure from being merely a Super Seven copy. The first D8s were the last Donkervoorts to receive Ford engines; 1.8 and 2.0-liter versions from the Zetec family.

The Donkervoort D8 270 is available since the summer of 2008. This version of the D8 series became the successor of the D8 270 RS, the limited edition that was introduced in 2005. The D8 270 has a restyled nose and grill that refer directly to the D8 GT and accelerates from 0–100 km/h in 3.6 seconds.This car was as one of the ten fastest production cars on Nürburgring's famous Nordschleife of 2011, at 7m 14.9s.

The Donkervoort D8 GT - introduced in 2007 - is the first closed Donkervoort. Compared to the open version of the D8, the D8 GT has entirely new front and rear suspension, increased track width by 8 centimeters, larger brakes for increased stopping power and 17-inch aluminum wheels. With a total weight of 650 kg, the D8GT is the lightest GT in the world. This is largely due to the extensive use of carbon fiber: the entire roof, the entire rear and the doors and fenders of the car are made of this material.

The Premium D8 GTO's were the first GTO's to be produced. After a sneak preview event introducing the D8 GTO in December 2012, existing customer were able to obtain one of these full option GTO's. The Premium D8 GTO were built as a limited series of 25 cars and had a little more power (380+ BHP) than e.g. the D8 GTO Performance.

In September 2014, the Donkervoort D8 GTO broke the lap record at the German Bilster Berg Drive Resort. The 380 hp Performance version set the new record for street-legal production cars at 1 minute 46.12 seconds. To celebrate this milestone – along with the opening of a Donkervoort subsidiary at that same location that year, Donkervoort introduced the Bilster Berg Edition, which was based on the record-breaking test car and built in a limited series of just 14 cars, a number that represented the successful year 2014. Technical developments included the further development and fine-tuning in the areas of chassis and road-handling. Furthermore, this edition is easily recognisable by its dark nose section, made entirely of carbon fibre.

Donkervoort introduced the D8 GTO RS in October 2016 as the successor to their D8 270 RS. Donkervoort states that they have reduced the D8 GTO's drag coefficient by 20 percent. The GTO RS offers a new suspension system as an additional option, and also offers a dual-clutch automatic transmission setup.