Automotive manufacturer of Arnhem Netherlands from 1900 to 1901. 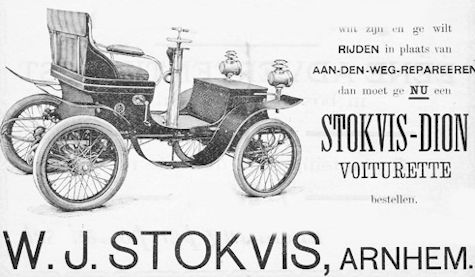 WJ Stokvis was a Dutch importer and manufacturer of automobiles in the early 1900s .

The Arnhem-based company imported automobiles to the Netherlands . Between 1900 and 1901 also some copies of a separate model were made.

Model called Stokvis Motorette was a small car . The drive was provided by a single-cylinder engine from De Dion-Bouton with 3 ½ hp . The design maximum speed was stated at 35 km / h. The price was 1900 Dutch guilders for the three-seat vis-à-vis version. There was also a four-seat tonneau .