Automotive manufacturer of Netherlands from 1899 to 1919. 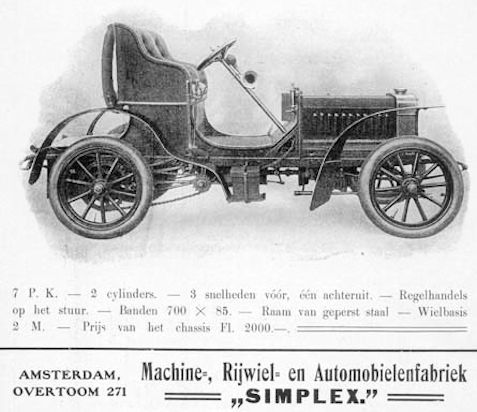 The company was founded in 1887. Initially, chocolate and cigarette machines were created. 1892 began the production of bicycles . In 1897, the company was the largest Dutch bicycle manufacturer. 1898 began the development and 1899 the production of automobiles. The brand name was Simplex . In 1899, under the direction of Mr. Leeuwenberg, the company was renamed NV Machine-, Rijwiel- en Automobielfabriek Simplex , based in Amsterdam . The company presented three in 1899, 1900 four and 1902 two copies at the Dutch motor show. Motorcycle production began in 1902. At times also rail vehicles emerged. In 1916 automobile production ended for the time being. After the end of the World War I , the emphasis was on bicycle production. The plant made a few automobiles until 1921. A total of about 200 to 250 cars. The motorcycle production ended in 1940. 1951 followed the merger with Locomotief , another Dutch bicycle manufacturer. Gazelle took over the company in 1965 and dropped the brand name Simplex in 1968.

Initially, three-wheeled tricycles were created. The first four-wheeled model had a rear engine and the body shape Vis-à-vis . It was similar to the Benz . On this basis, a van emerged . In 1900, 24 chassis with a self-developed two-cylinder engine were sold to the Dutch East Indies , who received their bodies on site.

1902 stood a model with a built-in motor by Vivinus at an exhibition. 1902 appeared a single-cylinder model with front engine , which - as well as for the future production models - by Fafnirwas delivered. 1906 came a two-seat Voiturette with two-cylinder engine from Fafnir.

In 1913, the four-cylinder model 35 HK for Wilhelmus Marinus van Rossum , which was delivered to Rome in 1914 , was created as a single piece . 1913 subcompact followed 10 HK with a Fafnir engine with 1093 cc capacity . The engine powered via a two-speed gearbox and a propeller shaft to the rear wheels. Striking was the round radiator grille .

In 1919, the tricycle 10 HK was presented with a V2 engine from MAG , which was no longer in mass production. Also the few still following single pieces had MAG engines.