Automotive manufacturer of heemstede.Netherlands from 1948 to 1950. 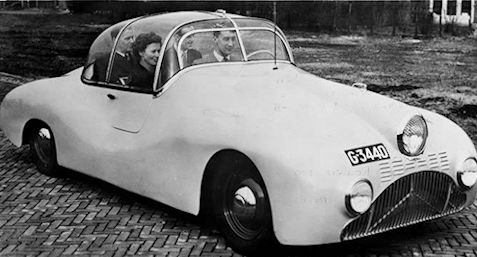 M. Gatsonides was a Dutch manufacturer of sports automobiles from the late 1940s .

The company from Heemstede was under the direction of racing driver Maurice Gatsonides , who in 1938 built his first vehicle called Kwik . In 1948 began the series production of automobiles , which ended in 1950. In total, 10 to 13 copies were made. The brand name of the postwar vehicles was initially Gatford , after an appeal by Ford Gatso .The Kwik remained a unique piece. Gatsonides used parts from Ford as well as the engine of a Mercury .  The V8 engine had 3917 cc displacement and 110 hp .

M. Gatsonides introduced the model as Gatford 4000 at the Geneva Motor Show 1948  , the series production then ran as Gatso 4000 . The chassis came from Matford , the engine in turn from Mercury, but here brought to 120 hp.  a motor with OHV valve control and 175 hp was available, with a top speed of 180 km / h  The range included the models Sports Roadster, Aero Coupe, 4-seater touring and convertible. A special feature was a third headlight, which was mounted above the radiator grille. Of these, only around eleven vehicles were built. also in 1949 the Gatso 1500 This model was created on the basis of the Fiat 1500 , was also called Gatso Platje , remained a unique item .