Automotive manufacturer of Eindhoven; Netherlands from 1928 on. 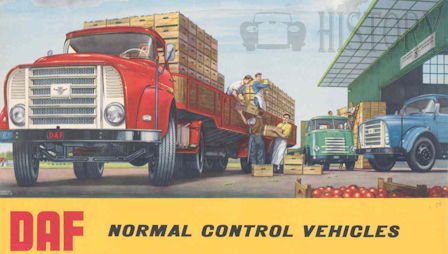 DAF ( Van Doorne's Automobiel Fabriek NV ) is a Dutch truck manufacturer and belongs as a brand to the US Paccar Group.

In 1928 founded Hub van Doorne in Eindhoven , the Hub van Doorne, Machinefabriek en Reparatieinrichting in the legal form of a limited partnership. At the beginning, the company focused on welding and ironworks for the Eindhovensche inland navigation and Philips , as well as trailer bus . The Great Depression of the 1930s forced the brothers Van Doorne - now also Hub van Doornes was younger brother Wim van Doorne on business involved - to look for new areas of application.

In 1932, the company was renamed Van Doorne's Aanhangwagenfabriek NV (DAF) and converted into a public limited company (Dutch Naamloze vennootschap NV). From then on, the company focused exclusively on the production of heavy-duty truck trailers. In 1936, the DAF Losser developed one of the world 's first container semi - trailers .

During the Second World War for the first time own towing vehicles were built, namely heavy artillery tugs for the military. After the war followed in 1948 a name change in Van Doorne's Automobiel Fabriek NV

In 1949 DAF started producing trailers as well as producing its own trucks, which were initially equipped with diesel engines from the British manufacturer Leyland for a long time . One of the strengths of the DAF truck production was the front-wheel drive cabs offered from the outset , initially rounded, from the 1960s onwards, then angular, following what was then the design, and basically nothing has changed to this day. From the 1950s to 1972 were also own hood cars in the program. 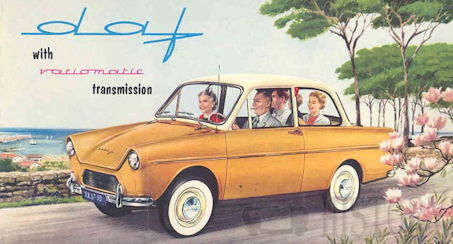 Starting in 1958, were treated with the DAF 600 , the Daffodil series and the models 33 DAF to 66 and passenger (s. U.) Produced. The DAF passenger cars are particularly through its revolutionary drive concept, the Variomatic - gearmade famous. This is a continuously variable V-belt automatic that allows smooth driving in an always optimal speed range. Among other things, the models equipped with it were known to be able to drive forwards and backwards just as fast.

With the DAF 77 was still a mid-size model developed with Variomatic, which then came as a Volvo 343 on the market and was produced in the Netherlands.

Although before the Second World War with regard to the truck production with Ford was worked together, DAF started only after the war its own truck production. It started with the DAF A30, A50 and DAF A10. The first trucks were equipped with Leyland and Perkins engines.

In 1963, DAF launched the Type 2600, the first modern truck that was fundamentally different from pre-war products. The cab driver cab was tilted forward from 1968. By using a high number of identical components, different cabs could be produced for different requirements.

In the 1970s, DAF was part of the " Foursome Club ", which included Saviem , Magirus-Deutz and Volvo . 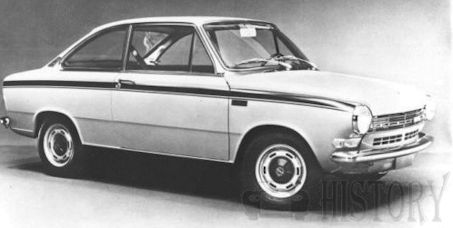 During this time, it was a big problem for DAF to find qualified production staff. In the following economic turmoil, the car division Volvo was transferred. Truck production continued and DAF was included in the "International Harvester" network. Part of this network were also the companies Atkinson and Pegaso. However, lack of investment led DAF to withdraw from the merger.

In 1987, the British company Leyland was acquired. As a result of this merger, DAF suddenly had two "home markets", the UK and the Netherlands . In addition, the merger greatly increased production capacity. In 1988, the series 95 was introduced with great success. With this model DAF achieved its first award "Truck of the Year". In the following years this series was extended by series 45/55 and 65/75/85.

After the complete takeover of Leyland DAF also tried to take over the Spanish truck manufacturer Pegaso . Pegaso was in a difficult situation due to continued losses. In 1989, DAF made a takeover bid. However, it did not come to the merger. The Iveco group took over Pegaso.

For the construction of light trucks, DAF had already agreed to cooperate with Leyland before the takeover. This company produced light trucks for DAF under license. After the acquisition of the Leyland Sherpa was further developed to Freight Rover, later to the DAF 200, followed by the heavier DAF 400 followed. The Leyland Roadrunner was initially marketed as DAF 800, but soon renamed DAF 45. Based on this, the DAF 55 was developed. When the truck market got into severe turbulence, DAF had to file for bankruptcy in 1993. The company started a new start in the same year under the name "DAF Trucks NV" and was taken over in 1996 by the American commercial vehicle manufacturer Paccar .

The winding up of the bankruptcy lasted 19 years. The procedure was terminated in 2012, making it one of the longest bankruptcies in the Netherlands. A total of EUR 500 million was paid to more than 1,100 creditors, which corresponds to a rate of 10%.

In October 2013, DAF opened an assembly plant in Ponta Grossa, Brazil, for € 320 million. Here trucks are built for the South American market.

In July 2016, DAF, together with four other European truck manufacturers, was fined 2.93 billion euros for banning price fixing. The share of DAF was 752 million euros . 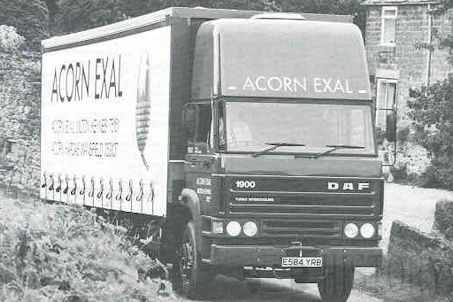 More information on
DAF
Automotive manufacturer of Eindhoven; Netherlands from 1928 on.