End of 1990, the production of the second Pajero generation began. Also from him there were three body styles: as three-door, five-door and three-door convertible.

The highlight of the V20 was the flexible Super Select 4-WD drive . This switchable four-wheel drive (base rear-wheel drive) with off-road ratio (1.9: 1) has a central differential with viscous brake, which can be locked in addition to 100%. Optionally, a rear differential lock was available.

In 1998, vehicles destined for General Export received a facelift. Wider fenders, new headlights, grille, bumper, fog lights and sidesteps were all part of the redesign.

As part of the facelift Mitsubishi also offered some special models of the Pajero. Especially limited to 50 pieces Limited Edition Dakar is now a sought after collector's item. Based on the 3-door Pajero, GeCo-Raid Sport, under the direction of Sven Quandt, built these 50 vehicles. Distinguishing features include the Recaro sport seats in the Avus Imola design, the stainless steel side bars and the stainless steel front bar. In addition, all Dakar have a sticker underneath the air conditioner, where the number of the corresponding model is specified.

was introduced in October 1997, which was developed in specifically in response to new  requirements for the Paris – Dakar Rally's T3 Class, a minimum volume of production vehicles to be produced on which the rally car would be based on. The Pajero Evolution was designed from the ground up as a dedicated rally vehicle. It came standard with a 3.5-litre 24-valve DOHC V6

Designed as a low-priced alternative to the Pajero V60 introduced in spring 2000, Mitsubishi re-launched its predecessor V20 as Pajero Classic in the summer of 2002.

The vehicle was still available as a three- and five-door, the starting price was 25,950 euros for the three-door and 29,990 euros for the five-door significantly below that of the V60.
The only engine variant was a 2.5-liter four-cylinder turbo diesel with 85 kW / 115 hp, low in emissions according to Euro 3. The Classic was produced in contrast to the original series V20 only with switchable four-wheel drive, the Super-Select -Allrad is not available. 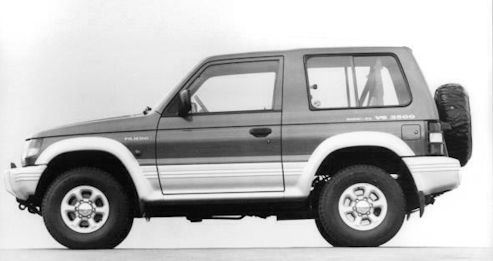