The Mitsubishi Town Box was a kei-car minivan of the Japanese car manufacturer Mitsubishi Motors . This was made from 1999 as the successor to the Minicab (minivan). Initially, there was the Town Box with a four-cylinder in-line type 4A30 engine with 657 cc with aluminum cylinder head, but since 2002, a series end-cylinder engine with 659 cc of the type 3G83 was installed. At the same time, the slightly larger version, marketed as Mitsubishi Town Box Wide and equipped with a 1.1 liter R4 engine (1094 cc), was discontinued.

There were also versions with four-wheel drive, In November 2011, the sale ended and the model was replaced by the Mitsubishi Bravo .The Town Box Wide was built under license in Malaysia by Proton under the name Proton Júara from 2001 to 2003 .Also as Soueast Veryca  is produced since 2005 by Soueast .

Nissan Clipper Rio U71W / U72W From 2007 to January 2012, the Minicab was offered by Nissan badge engineering as Nissan Clipper Rio. Differences existed in the design of the radiator grille and the brand emblems. 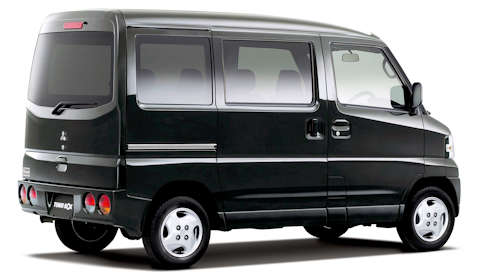