The Mitsubishi Pajero Mini was a small off road SUV from Japanese Mitsubishi Motors produced from 1994 to 2012. Using badge engineering , the model was marketed from 2008 to 2012 as Nissan Kix.

Pajero Mini model H51 / 56A.Based on the platform of the Mitsubishi Minicab Mitsubishi produced from December 1994 the Pajero Mini, a miniature edition of the successful Mitsubishi Pajero . Compared to the original, the Mini had shorter dimensions and a SOHC 660 cc naturally aspirated engine with 37 kW power (type 4A31), by means of DOHC and turbocharger 48 kW. The power transmission for the standard four-wheel drive was by means of 5-speed manual or 3- speed automatic transmission . 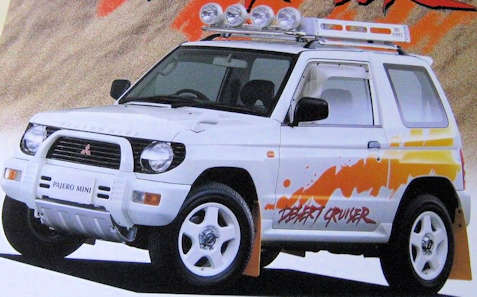 The great sales success inspired Mitsubishi to launch several limited editions such as "Iron Cross", "Desert Cruiser", "White Skipper" and "Duke". In October 1998, the Japanese kei-car regulations were updated and the Pajero Mini was widened and extended

From the end of 1998 Mitsubishi Pajero Mini model H53 / 58A  Mitsubishi offered the revised Pajero Mini now in addition to the 4WD version as a pure rear-wheel drive version. In addition, there was also optionally the Easy Select 4WD, with which you could disable or activate the four-wheel drive while driving. Instead of the three-stage, there was now an optional four-speed automatic transmission. Also new was a sport 4WD with charged DOHC engine. This version improved the efficiency of the intake air and exhaust system by installing 5 valves per cylinder (20 in total) and reduced fuel consumption unlike the previous model. In addition, there was a rear spoiler and 175 / 80R15 tires.

2008 was a major facelift with change in both the exterior design, as well as an upgrade of the dashboard. The production of the Mitsubishi Pajero Mini ended in June 2012. 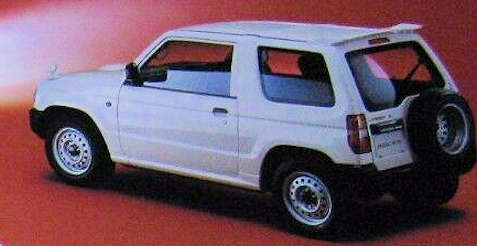