The Mitsubishi Mizushima is a series of three-wheeled vans that Mitsubishi Heavy Industries produced between 1946 and 1962. The construction was mechanically simple, but kept robust to be able to transport about 400 kg payload. There was a folding hood behind the 2-seat bench that reached to the windshield. Along with the Mitsubishi Silver Pigeon , the model was Mitsubishi's contribution to the rapidly growing demand for vehicles in the post-war Japan.

Over the years, larger payloads and other body styles have been offered. Thus, the TM3D model introduced in 1948 with a hardtop above the passenger cabin had been introduced in response to customer demands, and there were also models with a closed box body.

In 1955, the series became the Mitsubishi Pickup-Go , which could transport up to two tonnes of payload in a special version.

The Mitsubishi Leo, which was heavily influenced by the Mizushima in 1959 , was a transitional model between the first post-war vehicle and the Mitsubishi Minica , which meant the company's future in the 1960s and culminated in 1970 in the Mitsubishi Motors .The Leo used a 309 cc air-cooled single-cylinder engine (ME20) and 12.5 hp at 4,500 rpm. The payload was 300 kg and the top speed 65 km / h. A total of about 90,000 copies of the series were produced before it was replaced in 1962 by the Mitsubishi Minicab . 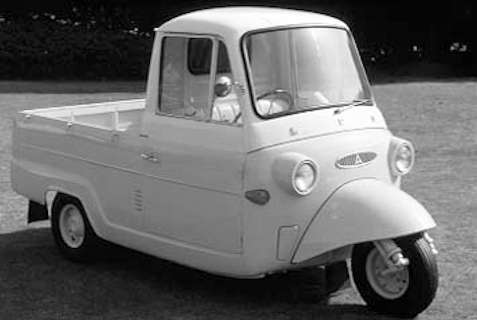