The Mini John Cooper Works WRC is a rally car developed by Mini , which was first used in 2011.

The Mini John Cooper Works WRC is the first car Mini has used for rally racing since the 1960s. The car drives for Team Mini with a limited campaign under the direction of Prodrive . Prodrive had already been successful a year ago with a campaign with the rally car Subaru Impreza WRC. The Mini John Cooper Works WRC has already contributed four victories to Team Mini. In 2012, the Rally Car wins with the drivers Daniel Sordo and Carlos del Barrio on the Tour de Corse . In the same year the racers Abdulaziz Al-Kuwari and Killian Duffy win a victory in the Qatar International Rally, Mini celebrated another victory in Spain in 2013. This time the drivers were Louis Monzon and José Déniz . The team celebrated their last victory in 2014 with the drivers Václav Pech and Petr Uhel winning the Barum Czech Rally Zlín . In the finals in 2011, they were in the Rally de France with the drivers Daniel Sordo and Carlos del Barrio. This was repeated with the same drivers in the 2012 Rally Monte Carlo .

The Mini John Cooper Works WRC is based on the technical platform of the Mini Countryman . This has a four-cylinder in-line turbo gasoline engine with a displacement of 1600 cc. The engine is from BMW. BMW also used the engine in previous rally championships, including at the FIA ​​World Touring Car Championship. The engine delivers 315 hp (232 kW) at a maximum speed of 6200 rpm. The length is 3976 mm, the width 1820 mm, the wheelbase 2480 mm and the weight is at least 1200 kg. 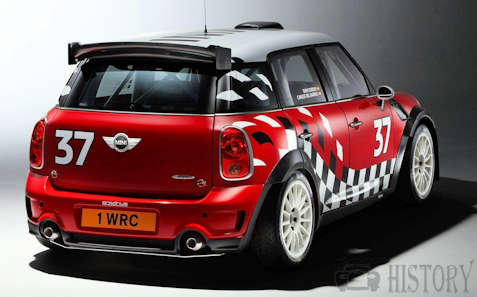