The body design is based on the 2nd generation of the MINI Countryman. As a result, especially the lines and the headlights have changed. The tubular steel frame has been redesigned and now allows the third spare wheel in the lower part of the vehicle to accommodate. This creates the necessary space in the rear to lower the cooling. Both changes made for a further reduction of the center of gravity.

In aerodynamics too, the MINI John Cooper Works Rally has been optimized through testing in the wind tunnel of the BMW Group. This allowed a higher top speed and improved acceleration from 140 km / h can be achieved. In addition, a new engine mapping was designed. By lowering the center of gravity of the car, in the form of 50 kg by 50 cm, handling in all types of terrain and maneuverability in bends could be improved.

In 2018, Yazeed Al-Rajhi and Timo Gottschalk won the Silk Road rally in the car class with a MINI John Cooper Works Rally . 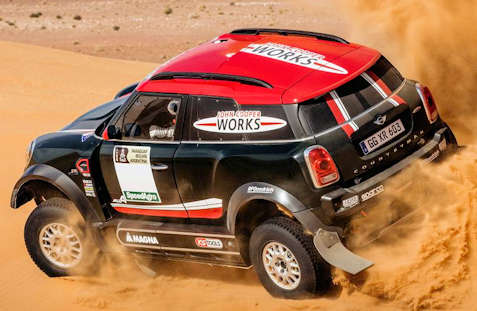