The third generation Mini was unveiled by BMW in November 2013, with sales starting in the first half of 2014. The new car is 98 mm longer, 44 mm wider, and 7 mm taller than the outgoing model, with a 28 mm longer wheelbase and an increase in track width (+42 mm front and +34 mm rear). The increase in size results in a larger interior and a boot volume increase to 211 litres.

The shape is slightly more rounded than the one it replaces, in order both to improve the car's aerodynamic efficiency and to enhance pedestrian protection in the event of accidents. This latest model rides on BMW's all new UKL platform that underpins the new BMW 2-Series Active Tourer.

The Mini is also the first in its segment to offer LED headlamps for its main and dipped beams as an option.

MINI has also released information on an all-new model called the MINI 5-door. It is marketed as a 5-door version of the new 3rd generation Hatch, but it is actually more closely related to the F54 Clubman, as it shares the stretched UKL1 Platform.

The dashboard retains its instrument layout, but adds a new instrument binnacle on the steering column for the speedometer, tachometer, and fuel gauge. The central instrument display now houses a four-line TFT display with the option to upgrade to an 8.8 inch screen for navigation and infotainment functions. 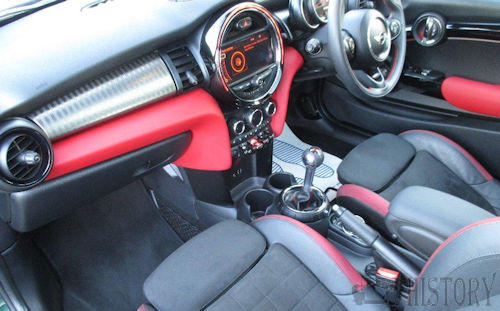