BMW introduced an all-new, second generation of the Hardtop/Hatch Mini model in November 2006, on a re-engineered platform incorporating many stylistic and engineering changes. It uses the Prince engine, the architecture of which is shared with PSA Peugeot Citroën and is designed to be more cost-effective and fuel-efficient, and is manufactured at the BMW Hams Hall engine plant in Warwickshire, Great Britain. The engineering was done in the United Kingdom by BMW Group UK Engineering, in Munich, Germany at BMW Group headquarters, and by external third parties.

Initially launched in the Cooper and Cooper S trim levels; the range was completed in 2007 with the Mk II Mini One. An economical version called the First was added in 2009. For the first time, there was a diesel-powered Hatch, available from April 2007, and badged as the Cooper D, which was supplemented in 2010 by the lower powered One D and in January 2011 with a new 2.0 L diesel badged as the Cooper SD.

The second generation was again offered in Japan at Japanese BMW locations 24 February 2007, and it continued to be in compliance with Japanese Government dimension regulations which supported sales of both the hatchback and the convertible.

The second generation Convertible was unveiled at the 2009 Detroit Auto Show and the 2009 Geneva International Motor Show as a 2009 model-year vehicle (first available for sale on 28 March 2009). The model features a device, marketed as the "Openometer", which records the number of minutes the vehicle has operated with its roof retracted.

Though the Mk II has a familiar look, every panel on the new car was changed from the previous model. New safety requirements resulted in the overall length increasing by 60 millimetres (2.4 in), the front end raised and the indicators being repositioned inside the headlight housings. The headlights themselves are now fixed to the front quarter panels rather than being integrated with the bonnet, so that they are not raised up with it when the bonnet opens. The car features a restyled grille and larger rear light clusters. The Cooper S retains the bonnet scoop in order to keep an association with the outgoing model — although the relocation of the intercooler to the front of the engine means that the scoop is now purely decorative. In addition, the Cooper S no longer has the battery located under the boot floor, instead being found in the more conventional location under the bonnet. The C-pillars are no longer encased in glass and have been shaped to improve aerodynamics and to reduce the tendency for dirt to accumulate on the back of the car. Much criticised for the lack of rear legroom, Mini added more space for rear passengers by creating sculpted cut-outs in the rear of the front seats. An engine start button replaces the conventional ignition key and, with the optional 'Comfort Access', the car may be unlocked with a button on the door handle when the key is brought close to the car. 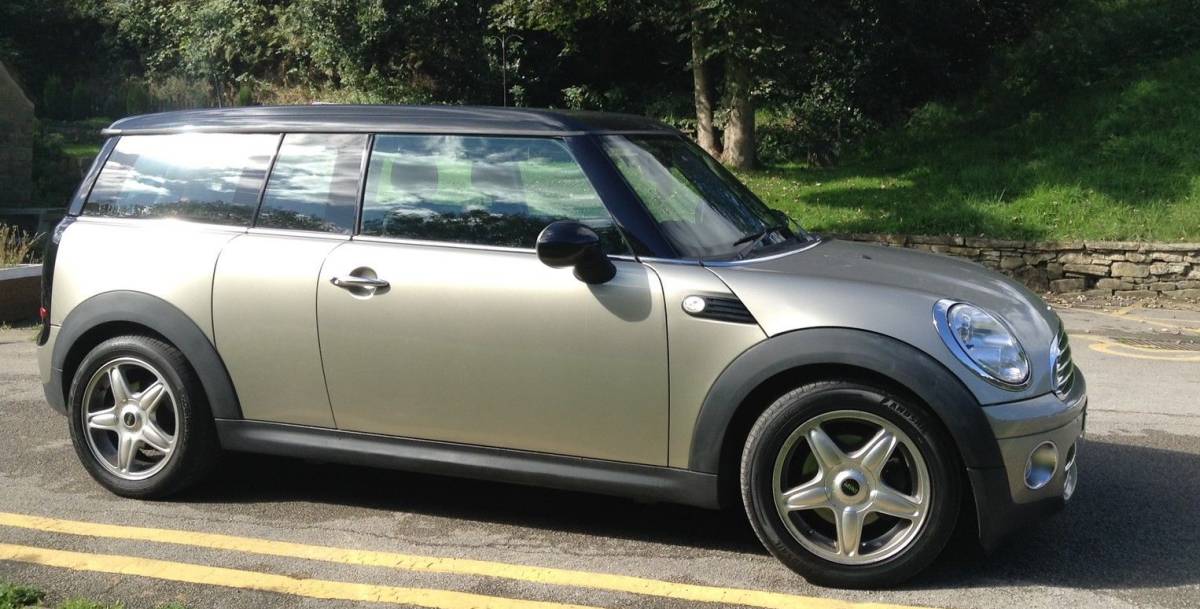 The Cooper and Cooper S models offer a new rear axle and aluminium components to reduce the car's weight; and a Sports kit option comprising harder springs, damper and anti-roll bars is offered with both variants. Another key difference is the introduction of an upgraded electric power steering system, the sharpness of which can be increased by pressing a "Sport" button in front of the gear lever (both auto and manual); additionally, the "Sport" button adjusts the response of the accelerator, and in conjunction with automatic transmission, also allows the engine to rev almost to the redline before changing gear.

In the Cooper model the Tritec four-cylinder engine was replaced with a 120 metric horsepower (88 kW) 1.6-litre Prince engine incorporating BMW's Valvetronic infinitely variable valve timing, developed on and with Peugeot's core engine. It has been reported in road tests that this takes the car from 0–100 km/h in a claimed 9.1 seconds (0-60 mph: 8.5 seconds) and has a top speed of 125 miles per hour (201 km/h). Fuel economy of 48.7 miles per imperial gallon (5.80 L/100 km; 40.6 mpg-US) on the combined cycle is nearly 8 miles per imperial gallon (6.7 mpg-US) better. The more powerful 175 metric horsepower (129 kW) Cooper S replaces the supercharger with a new twin scroll turbocharger in the interests of efficiency, and features gasoline direct injection; consequently, this engine version does not feature Valvetronic. This engine also has an "overboost" function which temporarily raises the torque by 20 newton metres (15 lbf·ft) under hard acceleration. As a result, 0–100 km/h is covered in a claimed 7.1 seconds (0-60 mph: 6.7 seconds), and top speed is 140 miles per hour (230 km/h). It achieves similar improvements in fuel economy to the Cooper, returning 40.9 miles per imperial gallon (6.91 L/100 km; 34.1 mpg-US) combined. Both engines may be mated to either a six-speed manual or automatic gearbox. The turbocharged engine is the same (although with some French engineering modifications) as the one in the Peugeot 207 GTi/RC.

Since 2008 all non-U.S. Mini models (except the standard Mini One) have been equipped with BMW's Efficient Dynamics fuel-saving technology, called "Minimalism Technologies" in Mini literature. This includes a start-stop feature that shuts off the engine when the car is stationary; when the clutch pedal is depressed, the engine is restarted with electricity generated from Brake Energy Regeneration. The Cooper D model attains 74.0 miles per imperial gallon (3.82 L/100 km; 61.6 mpg-US) and emits 104 g of carbon dioxide per 100 kilometres. A Mini One D has been available in Europe since 2009, attaining the same fuel efficiency and emissions of greenhouse gases as the Cooper D, which is itself quite comparable to the Toyota Prius for fuel economy and carbon dioxide emissions (potentially better than the Prius at higher rpm). With the widespread use of its Efficient Dynamics feature, Mini is the first automotive brand to have all models in its range classified as mild hybrids (Mini's parent, BMW, is still in the process of implementing Efficient Dynamics across its older models).

All models of the Mk II with optional dynamic stability control (DSC) also include "Hill Assist", a feature which prevents the car from rolling backwards on an incline by holding the brakes for 2 seconds after the driver releases the brake pedal, allowing the driver time to engage the accelerator pedal without the vehicle drifting. Also included with DSC is hydraulic EBA (Emergency Brake Assist) as opposed to the mechanical system on Minis without DSC. DSC is standard on all Minis since September 2008.

The interior of the Mk II echoes the style of the earlier model, but is in fact a complete redesign. The boot of the new car has an additional 10 litres (2.2 imp gal; 2.6 US gal) of load space. Other changes in design - both visible and otherwise - have contributed to the Mini's recently awarded five stars in the Euro NCAP tests. One example is the higher front bonnet, which now complies with the European pedestrian collision regulations.

Breakdown statistics reported by the German Automobile Club in May 2010 placed the Mini at the top of the small car class in respect of the low break-down rates achieved for cars aged between 0 and 4 years, narrowly beating the Ford Fusion and Mitsubishi Colt. 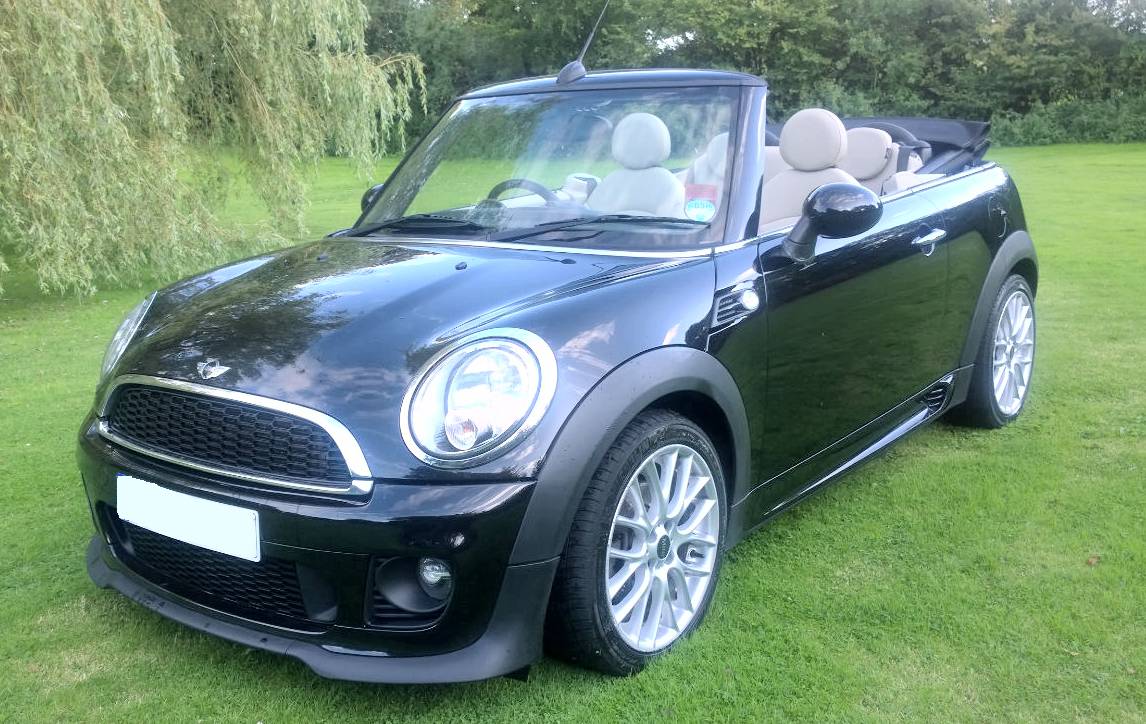 The Mk II range was launched with the One, Cooper and Cooper S derivatives. In July 2009, a new budget version called Mini First was added. Similar to the One, but lower output 1.6 L engine 75 metric horsepower (55 kW) and no automatic option, it preempted the launch of the One Minimalism by including the Mini Minimalism technologies. The vehicle launched with a base MSRP of £10,950. In January 2010 the Mini One Minimalism was announced, which was available in two states of tune depending on the market: (75 metric horsepower (55 kW) and 98 metric horsepower (72 kW)). The model was marketed as a more environmentally friendly option with low 119 grams (4.2 oz) per kilometer carbon dioxide (CO2) helped by low resistance tyres and flush wheel trims, and included the Minimalism technologies previously excluded from the Mini One.

From 2009, chameleon paints were offered in Asia and Europe.

The Mini John Cooper Works Challenge is a purpose-built race car, based on the R56 Hardtop, and manufactured in the BMW Motorsport factory located in Munich. The Challenge was unveiled in 2007 at the Frankfurt IAA Motor Show. 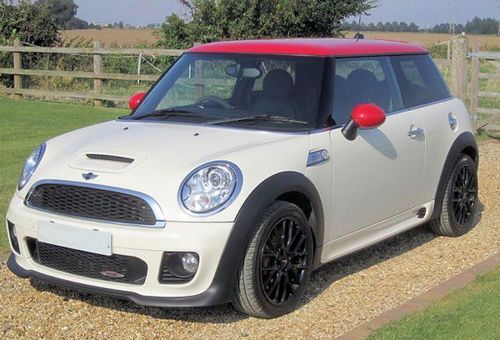 The JCW variants were unveiled in 2008 at the Geneva Auto Show, as 2009 model-year vehicles. Seven cars were entered into the 2011 24 Hours of Nürburgring, coming 4th in class and 34th overall. 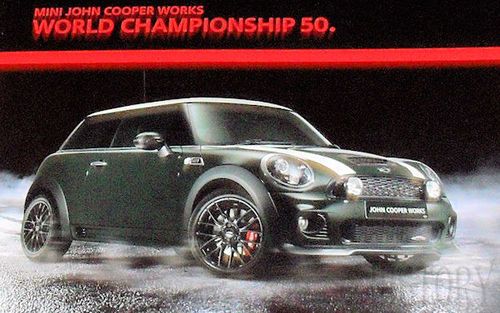 This is a limited-edition (originally planned to be 250 units, then subsequently increased to 500) of the John Cooper Works Hardtop. It commemorates the 50th anniversary of the victories by Cooper driver Jack Brabham in the 1959 World Championship of Drivers and by Cooper in the 1959 International Cup for F1 Manufacturers.

The car was unveiled in 2009 Mini United Festival in Silverstone.

The old tradition of producing special, limited-edition Minis was also continued with the new Mini. For example, the Mini Monte Carlo, recently launched in Singapore, is a tribute to the old Mini Cooper Monte Carlo, itself a limited edition Mini to celebrate Paddy Hopkirk's return to the Monte Carlo Rally 30 years after his original win. To celebrate the 50th anniversary of the Mini brand, two models were released in 2009: the Mini 50 Mayfair and the Mini 50 Camden. 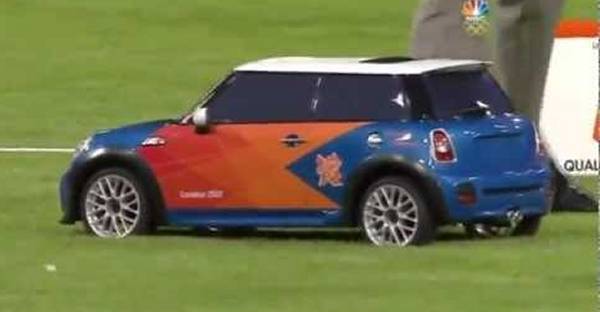 At the London 2012 Olympic Games, a set of quarter scale remote-controlled Minis delivered throwing equipment, loaded into the car through the sun roof, to the athletes.

In commemoration of Mini being an official partner of Team GB, an Olympic-themed special limited edition Mini Cooper was released, with a white roof featuring the London 2012 Olympic logo, and the London skyline printed on the dash