The Mini Coupé is a sports car produced by Mini. It was unveiled in June 2011 and formally launched at the Frankfurt Motor Show in September 2011.It is the first two-seat MinimIt was joined by a convertible version called the Mini Roadster in 2012 following its showing as a concept car in 2009. The Coupé is known by the internal code R58 and the Roadster by code R59.

The Coupe, which went on sale in the UK from 1 October 2011, is based on the Mini Cabriolet, but with only two seats allowing a bigger boot of 280 litres (9.9 cubic feet). The Coupé’s windscreen is angled rearwards by 13 degrees more than in the cabrio’s and the aluminium roof is 29 mm (1.1 inches) lower than standard Mini Hatch. The rear spoiler rises at speeds above 50 mph (80 km/h).

The Mini Roadster is the convertible version of the Coupé and was first shown at the Frankfurt Motor Show in September 2009 as a concept, and formally launched at the Detroit North American International Auto Show in January 2012.

The range of models and engines mirrors the Mini Coupé with a range of 1.6 L petrol engines in various levels of power and a 2.0 L diesel engine offered in some markets.Depending on the market, the soft top is either manually or partially electrically operated. 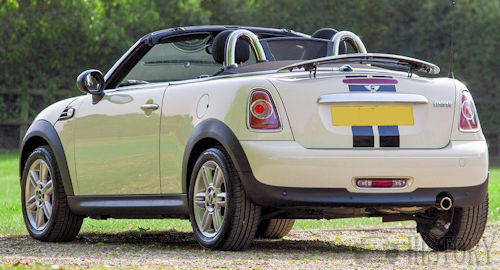