The Midget is a small sports car produced by MG between 1961 and 1980 , taking the name of a famous car from the pre-war period.

Long After the Second World War , the name Midget appeared again in 1961 The ADO34 was the name of a project roadster between 1960 and 1964  and later as the michelotti concept AD070 (below) that aimed to possibly develop a front-wheel drive based on the Mini for the new MG Midget or Austin-Healey Sprite but only remained a concept.. The series Mark I - III and Midget 1500 (BMC ADO47 ) were offered until 1979. 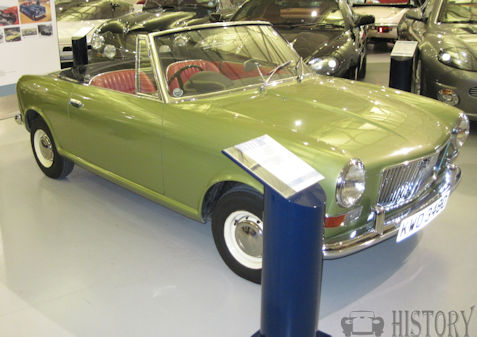 Based on the Austin-Healey Sprite , in 1961 the BMC derived a new 2-seat spider to be marketed with the sports brand MG. Simultaneously with the launch of the Midget , Sprite abandoned the Frog Eye bodywork to adopt the MG body.

The two identical cars in the mechanics and, except for some minor details (mask, logos and other details), even in the body shop, were practically two clones. Even the evolution of the two models was identical until 1971 , the year in which Sprite was removed from the price list, while the Midget remained in production.

In 1974 , in accordance with US legislation on automotive safety and pollution , the Midget was re-styled and adapted to the legislation. The adoption of black rubber absorbing bumpers (the so-called rubber bumpers ), which, at the front, also incorporated the grille (the bonnet was more sloping and elongated) did not help the Midget in terms of aesthetics . Also the structure (due to the American law) was raised, with a consequent loss of momentum of the line.

From the technical point of view the most important novelty was the adoption of the 4 cylinder in-line of 1493 cm³ of 70 hp of the Triumph Spitfire . The Midget was released in 1979.

The first version was a slightly more expensive version than the following. Inspired by Austin-Healey's "Sprite MKII", it still retains the rear suspension axle of the original "Sprite". The engine was a 948  cm 3 with two SU carburetors producing 46 hp (34  kW ) and 72 Nm. Brake drums were 7 inches (178  mm ). A hard top, heater, radio and luggage rackwere available as factory-fitted options.

In October 1962, the engine was increased to 1098 cm3, increasing the power to 56 hp and drums were replaced at the front. Spoke wheels have also become available.

The doors do not have outside handles or locks and the windows were sliding with plexiglass on the side.

The windshield has gained a slight curvature, now maintained in a stronger frame. The hood, although modified, continued to have a removable frame. Changes are the doors, where the plexiglass sliding windows give way to lifting windows, with outside handles and separate locks.The rear springs have been replaced by more conventional semi-elliptic types giving better handling. The hood, even if it has been modified, continues to have a removable frame for laying the canvas. If it starts to rain, then you have to mount the frame of the hood that fits in the trunk. The engine block is elongated and widened,

First version: 1966-1969 .No changes are made to the first version of the Mark III outside the engine. This is increased to 1275  cm 3 using the development seen on the "S" from Mini -Cooper. Fans were disappointed because the engine of the Cooper "S" was adjusted from 72 hp to just 65 hp (48  kW). This choice was made because the Midget would have been faster than the MGB, more expensive. On the Mini, the engine is in transverse position, with the gearbox under the engine, in a single crankcase. On the Midget, it is in longitudinal position, the gearbox in the axis of the engine, lubricated separately. The hydraulic system is modified and the hood is now permanently attached to the car, with an improved mechanism that makes it much easier to use.

It was only at the end of 1967 that the cars received several modifications. Security is increased by placing a padded dashboard with smaller gauges; a telescopic steering column, scissor hood hinges, a third windshield wiper, additional side marker lights, and an anti-intrusion door. The 1275 model also provides better fuel economy than the 1098 model. Between 1966 and 1969, 22,415 copies were produced.

Second version: 1969 - 1971. At the end of 1969, changes were made to the exterior, with the outlines of the taillights in black, a black grille, black sills, removal of chrome rods, placement of wheels 13 ". rays were seen more and more but that was still an option, after which the bumpers were redesigned, with the rear bumpers in two parts and the front bumpers rubberized. The 1970 model is also characterized by the black grille on the back, with the MG badge in the center.

Third version: 1971 -1974.In August 1971, the engine power fell to 54.5 hp. In January 1972, the square-shaped rear wheel wells became rounded. This year too, the Midget was equipped with a Triumph steering rack, giving a speed-consumption ratio, which was slightly lower than previous Midgets. A second exhaust silencer was also added in 1972. Alternators have been installed in place of the dynamos since 1973.

In this version, the "Midget" was modified to pass the new American laws.Large black plastic bumpers are added at the front and rear, and the ride height is raised. To compensate for the road behavior affected by these modifications, an anti-roll bar has also been put in place.The latter model Midget is built in chassis-hull, its equipped engine, 1275  cm 3 , of 65 hp at 6,000  rpm  ; it has an independent front suspension and front disc brakes.In 1974, this new model has oversized rubber bumpers, nicknamed "Sabrinas" after the name of the British actress spoiled by nature The name stuck and is used around the world. With Chrome bumpers will be added to meet customer expectations. The Large black plastic bumpers (usually called rubber bumpers) were added to the front and rear and the ride height was increased. As the ride height is increased, an anti-roll bar has been added to adjust the high center of gravity. 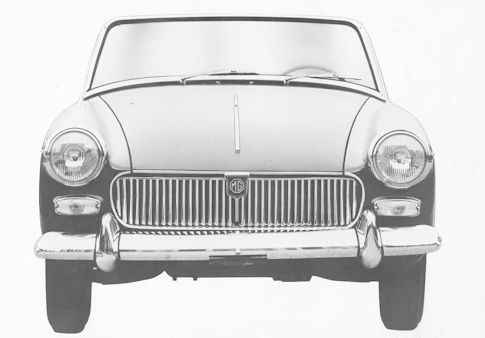