The ZS is basically a sportier version of the Rover 45 , which came in the fall of 1999 on the market. The 45 in turn is a revised version of the Rover 400 , which was introduced in mid-1995 as hatchback and notchback. This 400 had many similarities with the Honda Civic of the years 1995 to 1999, because during its development Rover and Honda worked in a partnership to develop cars together for the Japanese and European market.

The MG ZS was developed from the Rover 45, as BMW sold in the spring of 2000 Rover. The development of the model was accelerated by the fact that Rover had already created a prototype with V6 engine and sporty chassis of the predecessor type 400. In fact, MG Rover developed MG versions of all three models available on the market: the Rover 25 was joined by the MG ZR , the Rover 75 by the MG ZT, and the Rover 45 by the MG ZS. Since it was equipped with Honda heritage  front suspension with double wishbones and a multi-link rear axle.As Rover, the car was always optimized for comfort rather than handling, as MG was the other way around with a sporty feel.Although the appearance was admittedly not as elegant as that of the MG ZR or the MG ZT, the ZS was the trio's best driver car as the V6 provided a lot of power and the sleek suspension provided excellent handling. 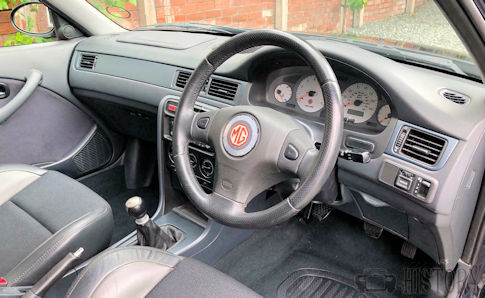 In early 2004, the ZS was revised together with the rest of the MG Rover model range. The retro design details that were attached to the vehicle when it became 400 to 45. For the first time, the Rover 45 and the MG ZS were vehicles with different looks, at least as far as the top model ZS180 released in the fall of 2003 was concerned. Widened wheel arches and ventilation grille in the fenders, as well as other accents, distinguished the new ZS clearly from its sister model.

The ZS also got a new interior with new upholstery materials and a redesigned dashboard, which also had controls for the air conditioning on some models.The production of the MG ZS was discontinued in April 2005 after the bankruptcy of MG Rover and the manufacturing rights went back to Honda , from which also the plans of the original vehicle from the year 1995 originated.

The ZS featured in the British Touring Car Championship since 2001. The 'West Surrey Racing Team' (WSR) was a factory racing stable for many years, initially using cars with a 2.0-liter version of Rover's KV6 engine. Later, they turned to the four-cylinder Rover K series engines. Former "WSR" cars came into other hands and in 2002.

A successor to the Rover 45 / MG ZS (initially called RDX60 ) was in development. It was based on the shortened floor pan of the Rover 75 and should appear as a combined sedan, sedan and station wagon ("Tourer"). The chassis development was done by Tom Walkingshaw Racing , but discontinued with the collapse of this company.The fact that the RDX60 did not come out meant that the ZS was reworked and kept in the model range until the end of MG Rover. 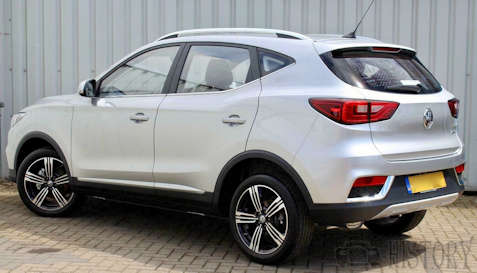