The MG 3 (until 2011 MG 3SW ) is a compact car brand MG that the Chinese carmaker Shanghai Automotive Industry belongs. Built since 2008.

The MG 3SW based, like its predecessor MG ZR on the Rover Streetwise of British carmaker MG Rover . After the bankruptcy of the MG Rover Group in 2005, the production of the Rover Streetwise had been discontinued. The production of the SW by the new majority shareholder SAIC began in 2008 with a 1.4 liters (76 kW). engine and Wheelbase of  2520 mm. 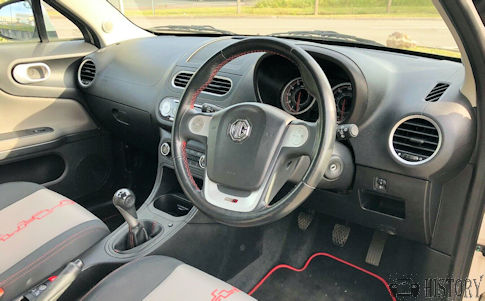 The abbreviation SW stands for S tation W agon .A preview of the second generation of the model offered in 2010 the study MG Zero at the Beijing Auto Show . The vehicle has been offered in China since spring 2011 and has been produced for the European market since 2013 at the Birmingham site . The sister model is named Roewe 150 . For other markets, the MG 3 is manufactured in Pukou .Since 2013, there is also another assembly line in Laem Chabang on which the MG3 right-hand drive from the Charoen Pokphand Group is assembled.

The car shares the technical base with the compact-car Roewe 350 . However, the MG is offered not only with the 1.5-liter engine with 80 kW, but also with a smaller 1.3-liter engine with 65 kW. Both motors are available with manual or automatic transmission. The mini-SUV MG3 Xross is called in some countries MG3 Cross distributed.