MG began offering the MGB GT V8 in 1973 utilising the ubiquitous aluminium-block 3528 cc Rover V8 engine, first fitted to the Rover P5B. This engine had been used in the A-body platform Buick Special and Oldsmobile F-85 and was the lightest mass-production V8 in the world. The Buick version had a dry, undressed weight of only 318 lb (144 kg), however by the time Rover had modifications to strengthen the block the engine was considerably heavier (170+kg). Some improvements were made by MG-Rover, and the engine found a long-lived niche in the British motor industry. These cars were similar to those already being produced in significant volume by tuner Ken Costello. MG even contracted Costello to build them a prototype MGB GT V8. However, the powerful 180 bhp (134 kW) engine used by Costello for his conversions was replaced for production by MG with a more modestly tuned version producing only 137 bhp(102 kW) at 5000 rpm. But 193 lb·ft (262 N·m) of torque helped it hit 60 mph (97 km/h) in around 8 seconds, and go on to a respectable 125 mph (201 km/h) top speed.

By virtue of its aluminium cylinder block and heads, the Rover V8 engine actually weighed approximately forty pounds less than MG's iron four-cylinder. Unlike the MGC, the V8 that provided the MGB GT V8's increased power and torque did not require significant chassis changes nor sacrifice handling.

Both chrome & Rubber-Bumpered GT versions of the V8-powered MGB were produced by the factory. Production ended in 1976. MG never attempted to export the MGB GT V8 to the United States. They chose not to develop a left-hand-drive version or to seek US air pollution emission certification of the MGB GT V8, although the Rover V8 engine was offered in US-bound Rover models throughout the same period and beyond. British Leyland Motor Corporation management cited insufficient production capacity to support anticipated demand for the V8 engine in MGB GT, so they priced the MGB GT V8 high.

The MGB GT V8 was very warmly received by the automotive press, but British Leyland Motor Corporation was reportedly concerned that the MGB GT V8 would overshadow their other products, including the more expensive Triumph Stag. 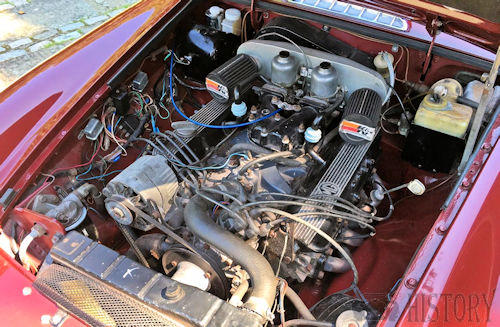 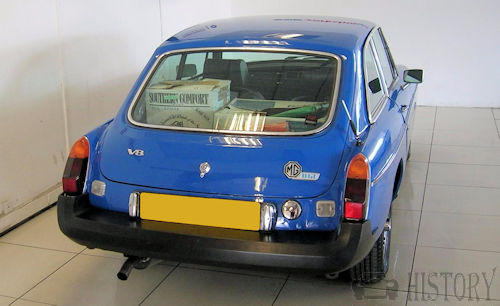