The Merkur XR4Ti (eXperimental Racing, 4 series, Turbo, advanced Injection system) was a short-lived United States and Canadian-market version of the European Ford Sierra XR4i. It was the brainchild of then Ford vice president Bob Lutz. It was sold in the US from 1985 to 1989. It was the first vehicle sold by Merkur, followed in 1988 by the Merkur Scorpio.

The cars were hand assembled and built entirely by KarmannCoachworks in Rheine, Germany. Unlike with the Scorpio, the XR4Ti did not carry over the Sierra badge from Europe, since at the time it was also being used by General Motors in North America for two completely different vehicles: the GMC C/K Sierra and the similar-sounding Oldsmobile Cutlass Ciera. When first introduced, the XR4Ti had a starting price of US$16,503, which is equal to about $37,652 today.

The XR4Ti was distinguished mechanically by its turbochargedFord Lima 2.3 L four-cylinder SOHC engine and independent rear suspension, and stylistically by its large wind tunnel-derived biplane spoiler (replaced on the 1988–89 models with a single rear spoiler). It came with either the C3 three-speed automatic transmission or the Ford Type 9 five-speed manual transmission. Mechanically, it differed from the European Ford Sierra XR4i, which had a 2.8 L Ford Cologne V6. Airbag legislation for the 1990 model year and weak sales are frequently cited as the cause for the Merkur range to be discontinued.

The XR4Ti was on Car and Driver's Ten Best list for 1985. In 2009 however, the magazine's staff apologized for that inclusion and recanted the award due to a lack of sales and its peculiarity. 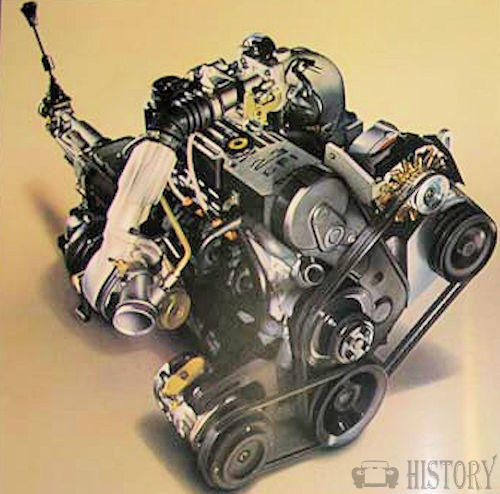 The XR4Ti came with one engine, a 2.3 liter turbocharged, in-line, fuel-injected Lima four-cylinder using an EEC-IV computer. The four-cylinder engine was generally rated at 145 hp (108 kW) when mated with an automatic transmission (8 to 10 psi (0.55 to 0.69 bar) boost), and 175 hp (130 kW) when matched with the five-speed manual transmission (12 to 14 psi (0.83 to 0.97 bar) boost). This engine is the same as is found in the SVO Mustang and the Thunderbird Turbo coupe of the time, though the SVO Mustang and 1987-88 Thunderbird Turbo coupe differ by having an intercooler and different EEC-IV programming. 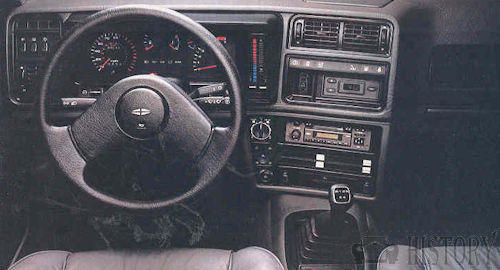 In its short life, the XR4Ti had some minor changes either by design or by implemented Technical Service Bulletins. Examples include: monochromatic paint (red, black, and white), uprated heater cores, larger rear hatch glass (in conjunction with the single rear wing), improved steering rack, upgraded dash construction, etc. Many of these parts were taken from the Sierra Mk.II body shell which was only sold in continental Europe with some being Merkur-specific parts. Most of these changes occurred in the 1987 model year.

The top speed of the manual-transmission XR4Ti 1985-87 is 130 mph (210 km/h). The biplane rear spoiler was changed to a single spoiler for the 1988-1989 cars; it actually increased the drag coefficient compared to the biplane spoiler of the earlier cars which have a coefficient of 0.32.

Car & Driver tests for the XR4Ti reported 0-60 mph times from 7.0 seconds and as high 7.9 seconds and 1/4 mile times around 15.7 seconds. Later tests by Car & Driver showed 7.8 seconds for the 0-60 mph times and they mentioned the press car might have been a ringer which was common at the time. In their test data, they stated the press car came with a limited slip differential which was an error in the article as it was not offered as standard or an option for the XR4Ti during its production.

Despite the XR4Ti never being sold outside the United States and Canada, in 1985, Andy Rouse used one to compete in the British Saloon Car Championship. He took the overall title for that year and the class title for the following year with 14 race victories altogether. In 1986, Eggenberger Motorsport was among the few to use an XR4Ti to compete in the European Touring Car Championship and the Deutsche Tourenwagen Meisterschaft (German Touring Car Championship) with positive results. Ford used the car's technical feedback from the teams to develop the super car version of the Sierra in 1986, the Ford Sierra RS Cosworth, which was introduced to race tracks in 1987, though its life was short, as it was superseded in mid-1987 by the Ford Sierra RS500. Some of the body panels used to stiffen the Sierra chassis and create the Merkur shell were subsequently branded 909 Motorsport parts for later adaptation to a Sierra shell. Many see the successes and failures of the XR4Ti as being the blueprint for success of the dominant RS500 Sierras.

Between 1986 and 1987, Pete Halsmer and Scott Pruett campaigned the Roush-prepped XR4Ti, although of a tubeframeconstruction like that of a NASCAR racer, to take the Trans-Am Series title. Along with Paul Miller, the pair also campaigned an XR4Ti successfully in the IMSA series in 1988.

The XR4Ti would be the last vehicle imported by Ford Motor Company from Germany into North America until 2016, when the Ford Focus RS was introduced. Some have noted the Focus RS as a spiritual successor to the XR4Ti, noting its German Ford origins, both having a 2.3 litre turbocharged engine along with a similar positioning in the marketplace. Also, comparisons have been made of the XR4Ti to the 2015 Mustang EcoBoost, which also has a 2.3 litre turbocharged engine and is now imported to Europe from the United States as Ford's entrant in the same market segment in which the Ford Sierra XR4i, the parent of the XR4Ti, once competed. 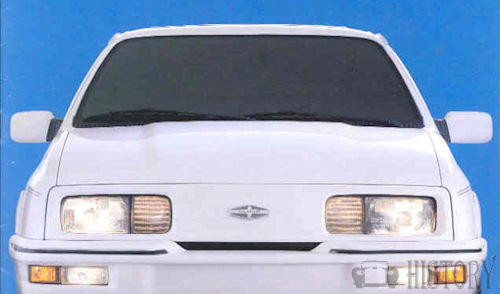