The second generation of the Mariner was unveiled at the South Florida International Auto Show on October 6, 2006, and was designed to re-brand the Mercury brand. At the end of 2007, it went on sale.

The Mariner received extensive modifications, but continued to build on the Ford CD2 platform . The bodywork revisions include a higher waistline, new doors and wheels, new headlamps and taillights, and a new tailgate. The interior has been significantly improved by new seats, higher quality materials and better features. The engine offering remained unchanged, but the 200 hp 3.0-liter Duratec V6 has been redesigned to use 10% less fuel.

The 2009 Mercury Mariner  now with aa 2.5-liter engine and 6-speed automatic transmission the new powertrain improved the fuel economy and power to 170 horsepower . The existing 3.0-liter Duratec V6 was improved now with 240 hp.

The new engine was also the new basis for Ford's hybrid models, including the Ford Escape Hybrid and Mercury Mariner Hybrid With 155 hp (116 kW). “For every eight Escape and Mariner vehicles we sell, one of them is a hybrid, and the appeal is growing,” says Sue Ciscke, Ford senior vice president, Sustainability, Environment and Safety Engineering.

End of 2010, the production of the Mariner expired due to the termination of the Mercury brand.The Mariner was offered, like all other contemporary Mercury models, only in the US, Mexico and Tanzania. 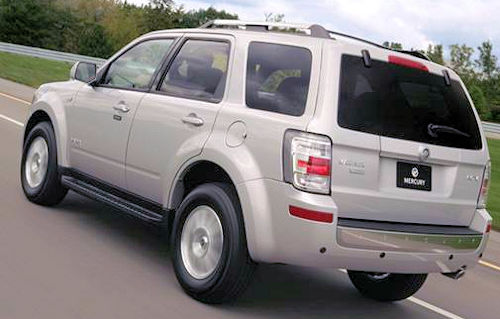