The Mercury Mystique was a mid-range car built by Mercury , a Ford Motor Company brand , from mid-1994 to late 2000 . It was a more luxurious model of the concurrently produced Ford Contour , based on the European Ford Mondeo .

The Mystique was, like the Contour, only available as a four-door notchback sedan; the hatchback and estate versions of the Ford Mondeo were not offered in North America. As engine variants were a four-cylinder in-line engine with 2000 cc and a 2500 cc V6 engine available; Both engines were used in similar form in the Mondeo.

After the first half of the production period, in the fall of 1997 there was a more extensive facelift , which matched the appearance of the Ford Mondeo with headlamps and taillamps a redesigned front fascia, front and rear quarter panels .

Like the Contour, the Mystique was not a particularly successful model of the Ford corporation. Therefore, both models initially remained without successors. With the start of production of the American Ford Fusion in early summer 2005, the Mystique with the Mercury Milan , a better-equipped sister model of the merger, a successor. 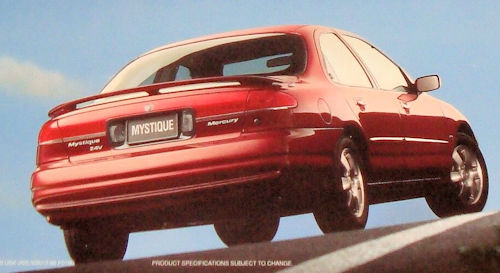