For 1974, the Cougar was shifted from its Mustang, ponycar origins onto a new platform and into a new market as a personal luxury car. It now shared a chassis with the larger Mercury Montego/Ford Torino intermediates and was twinned with the new Ford Elite. The wheelbase grew to 114 inches (2,896 mm) and became practically the only car to be upsized during the downsizing decade of the 1970s. These years marked the end of the "luxurious Mustang", and the beginning of the Cougar's move towards becoming a "junior Thunderbird" and eventually a sibling of the Thunderbird. TV commercials compared the Cougar to the Lincoln Continental Mark IV, the most notable featuring Farrah Fawcett in a 1975 TV ad.

The Cougar was being marketed as an intermediate-sized personal-luxury car to compete against GM's Chevrolet Monte Carlo and Pontiac Grand Prix. Every GM division had an entry in this market by 1974, and the market was too large to ignore. The new Cougar paid homage to its smaller predecessor with a three-piece grille up front, topped by a new hood ornament which featured the Jaguar-like silhouette of a creeping Cougar. The car's Montego heritage was fairly evident from the back, however. In between, it had acquired the sine qua non of the personal luxury car in the 1970s: opera windows. This body ran unchanged for three years, and during this period all Cougars were XR-7s.

The Cougar was also restyled inside due to the switch to the larger intermediate body, but maintained the front fascia look from 1973 with a new styling feature including a rectangular opera window in the rear C-pillars. The Cougar also began to share the look of the Thunderbird and Continental Mark IV as the years progressed. The base model and convertible were dropped this year, but the XR-7 moniker soldiered on as the only model in the Cougar lineup. 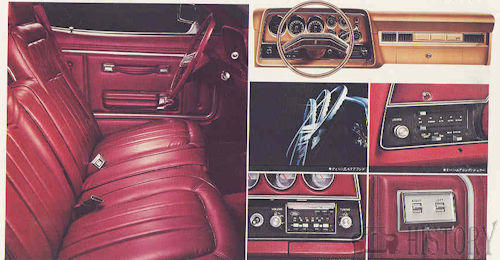 In 1975, the Cougar XR-7 continued to add more luxury features as it moved upscale. But with more features, the Cougar was gaining in weight, as well. Compared to the 1967 version, the 1975 version weighed a full 1,000 lb (450 kg) more. Despite the added weight, the buying public wanted the Cougar, and sales figures reflected that fact. For the performance fans, however, a high-performance rear axle and 'Traction-Lok' differential continued to be on the option sheet. The standard engine continued to be the 148 hp (110 kW) 351 Windsor two-barrel V8 with the 158 hp (118 kW) 400 two-barrel V8 and 216 hp (161 kW) 460 four-barrel V8 optional.

The 1976 Cougar entered its last year largely unchanged from 1975. A new body for the Cougar was coming in 1977, so nothing else major was done to the Cougar. Only some minor trim pieces served to differentiate this year from last. Engines continued unchanged, as well. The high-performance axle and Traction-Lok differential were dropped this year. Twin Comfort Lounge reclining seats, with or without velour cloth trim, were the only major change for the interior, but it also showed how much the performance aspect of the Cougar had disappeared. Despite this Cougar sheetmetal was used by the Wood Brothers and Bud Moore NASCAR Racing teams on some of their Winston Cup racecars during the 1976 thru 1980 season.