An all-new Cougar greeted buyers in 1983; gone were the sedan and station wagon models which were facelifted and moved under the Marquis nameplate. The Cougar sported a completely new aerodynamic body, but retained the same chassis. This restyle was shared with its sister car, the Thunderbird, with the two becoming the first examples of the new "aero-look" design, which would eventually spread throughout the Ford line and ultimately the entire industry. The major difference between the two was the side window treatments; the Cougar had a more formal notchback with a nearly vertical rear window and upswept quarter windows. This made the Cougar look more aerodynamic, as well as more exciting, when compared to previous Cougars. The new look was such a hit, it outsold the Thunderbird for 1983. Because of the money spent in restyling both models, the interiors were left mostly unchanged from 1982. The GS (but not badged as such) and LS models carried over from the previous year; however, the XR-7 did not, as there was not yet a performance version ready. The engine lineup changed, as the only two engines offered were the 232-in3 (3.8-L) V6 and the 302-in3 (5.0-L) V8. The 390-mm (15.3-in) TRX wheels were an option.

After its redesign in 1983, the Cougar remained mostly unchanged for 1984. The XR-7 returned and for the first time, its standard engine was not a V8 or V6, but a turbocharged four-cylinder engine. Similar to the Thunderbird Turbo Coupe, the XR-7 came only with the 145 hp (108 kW) 140-in3 turbocharged I4. The XR-7 also featured blacked-out window trim, wide body side mouldings and two-tone paint in silver with charcoal grey lower (or the reverse combination) with tri-band striping to separate it from the base Cougars. A performance suspension was also standard. A three-speed automatic or a five-speed manual were offered on the XR-7. Also for 1984, the 3.8-L V6 switched from a carburetor to throttle-body fuel injection. 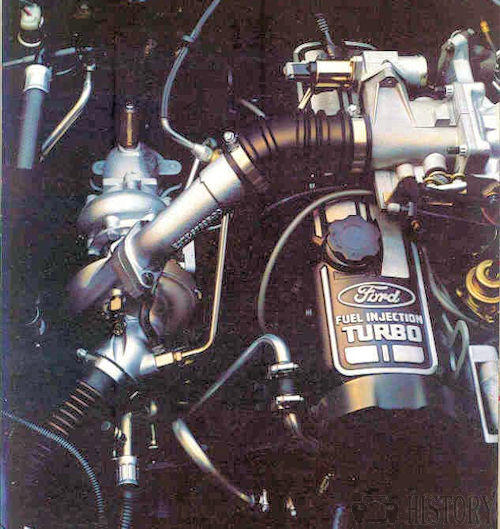 Subtle exterior changes, such as a new Mercedes-Benz-esque grille and new taillights were just a few of the many changes, as a whole new interior greeted buyers for 1985. This new interior featured a digital instrument cluster which lent a futuristic touch to the Cougar, but it was only available on base Cougars.

The 1986 Cougar was a carryover year; it was supposed to be redesigned this year, but with sales continuing to be strong, Ford decided to push it ahead to 1987. The biggest changes were under the hood, as the 302 V8 received new sequential electronic fuel injection (SEFI), which boosted power to 150 hp (112 kW); a 20 hp (15 kW) improvement over the previous year. The Cougar XR-7 continued to offer only the turbocharged I4, but it got a power increase to 155 hp (116 kW).

The Cougar received a complete restyle for its 20th anniversary. Much smoother than the previous Cougar, it featured flush-mounted headlights and grille. The side quarter glass retained its upswept design, but it was stretched more to the rear of the car. The interior remained mostly unchanged. The GS was dropped, leaving the LS and XR-7 models. The XR-7 changed by dropping the turbocharged I4, and the 302 V8 became the standard engine. The manual transmission was also dropped this year. The digital instrument cluster, previously optional on the GS/LS models, became standard with exception to the limited edition XR-7, which became analog only. The special lower tri-stripes and blacked-out window trim continued to set apart the XR-7 from the LS. The Cougar's 20th anniversary was highlighted by a limited-edition Cougar. 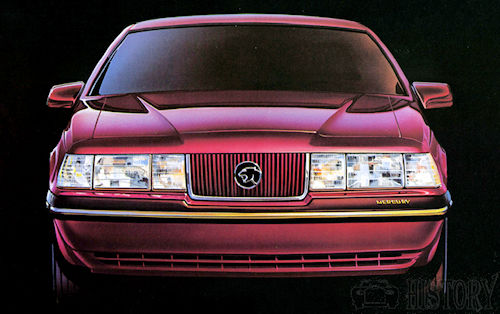 To celebrate its 20th anniversary, a limited-edition Cougar was produced. The car went on sale in February 1987. The Cougar LS was the starting point for this special model. These special Cougars featured these standard items to set them apart from the regular production Cougars:

The only options were power moonroof, power antenna, illuminated entry, keyless entry, automatic climate control, engine block heater, and a Traction-Lok axle with a 3.08 gear ratio. Total Production of 20th anniversary Cougar was 5,002, with at least 800 destined for Canada.

With the new MN-12 chassis and new body style coming in 1989, the 1988 Cougar changed little from the previous year. Outside, the biggest change was the XR-7 now came in a new monochromatic color scheme. It was available in three colors (black, red, and white) with body-colored or optional argent-colored wheels. The base 232-in3 (3.8-L) V6 was revamped to include multiport fuel injection and an internal balance shaft that increased power to 140 hp (104 kW). The 302 V8 received a dual exhaust option, which added 5 hp (4 kW). The analog gauge cluster returned as standard on the XR-7, but the digital cluster remained as an option on both the LS and XR-7.