In 1977, radical marketing changes came to Ford's intermediate lineup, although under the skin, mechanical changes were few. The Montego name was discontinued, and all the intermediate Mercury vehicles became Cougars (Ford renamed its Torino line the LTD II). There were now Cougar sedans, complete with opera windows, a lower-line base coupe, and even a station wagon (Cougar Villager), which lasted only one year (1977). The top-of-the-line XR-7 continued as a separate model, with unusual simulated louvers applied in front of its opera windows and a new rear style that was meant to evoke the larger Lincoln Mark coupe. This year, the Elite name vanished from the Ford lineup and the Thunderbird was downsized onto its chassis to become the XR-7's corporate twin. This association between the two cars would continue for two decades. In keeping with the general trend of the times, the old Torino chassis was discontinued after 1979 and all Ford and Mercury intermediates went over to the smaller, lighter Ford Fox platform for 1980.

Customers to Lincoln-Mercury showrooms were surprised by the all-new Cougar this year. New sharper and straighter styling that mimicked the Ford Thunderbird and Lincoln Continental Mark V replaced the "fuselage look" of earlier Cougars. The Cougar now shared its body with the Thunderbird, which was downsized to the intermediate bodyshell this year from that of the Continental Mark IV and shared the Cougar's 114-inch (2,896 mm) wheelbase, putting the T-Bird squarely in the intermediate personal-luxury car market as opposed to its previous higher-priced segment of that market shared with the Buick Riviera and Oldsmobile Toronado. This move would join the Thunderbird and Cougar together and would last until their demise in 1997. The lineup was also expanded to include a sedan and station wagon. This was because the Mercury Montego had been discontinued and its models were absorbed into the Cougar lineup as a result while Ford Division renamed the Torino as LTD II. The base Cougar returned, as well, for all three models, but the XR-7 came only as a coupe. The Cougar Brougham was available as a coupe or sedan, and the Cougar Villager was available as a station wagon only. The engine lineup changed for this year, as well. The base engine was the 134 hp (100 kW) 302 two-barrel V8 on all coupes and sedans. The station wagons had the 161 hp (120 kW) 351 two-barrel V8 standard. The 149 hp (111 kW) 351 two-barrel V8 and 173 hp (129 kW) 400 two-barrel V8 were optional on all models. 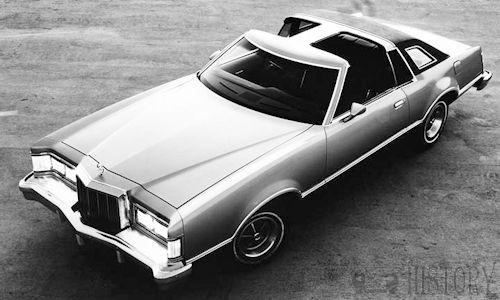 Few changes were made in 1979, as Mercury prepared to downsize the car. A new electronic voltage regulator and a plastic battery tray would be the biggest mechanical changes for the Cougar. The standard engine continued to be the 302 V8 with the 351 the only optional engine available, as the 400 was discontinued. A redesigned grille with body color inserts and a revised taillight assembly were the only exterior body changes.