The 6.3 also found its way into touring car racing and rallying . The car was also a popular tuning object, because the engine was designed specifically "gentle" despite its high performance and experts could increase the performance relatively easily. The so-called "red sow" , an inserted in touring car racing 300 SEL 6.3, motorized with a bored to 6.8 liter displacement V8 engine with 295 kW, was the first model of the tuner AMG , the new cylinder heads on past , easier engine machining to increase performance.

AMG offered two tuning stages with 290 and 320 hp for the road. For 70 additional hp were made at constant displacement extensive changes, as they were then customary for a costly performance increases and necessary: ​​The series cylinder heads were replaced by improved versions with other combustion chambers, the suction tube polished, the intake ports enlarged and polished, edited the rocker arm and special valve springs, autothermal pistons and "sharper" camshafts installed. The speed level increased by about 700 rpm and the compression increased from 9.0: 1 to 9.9: 1. That was enough for a torque of 541 Nm at 3500 rpm and 320 HP at 4750 rpm.

Mahle's patented autothermal pistons were among the most advanced of their kind at the time: special steel strips, which were poured into the pistons, provided optimized, targeted removal of the unwanted heat from the piston resulting from combustion and friction on the cylinder walls; special holes in the grooves of the oil scraper rings improved lubrication, thus reducing friction and improving the removal of heat through the oil circuit. Higher piston speeds and speeds were thus possible.

The 6.3 was not intended for racing . The high weight led in races repeatedly to brake and tire problems, but the engine had potential. The first test at the 6-hour race in the Portuguese colony of Macao ended with a victory. It was then decided in July 1969 at the 24 Hours of Spa-Francorchamps three cars were used, two of them got 6834 cc of drilled sump lubrication and 350-360 hp, while the third took 310 hp out of the 6.3 - liter engine. The training times were encouraging, but at unexpectedly high temperatures, the narrow tires on the rough new track did not last 3 laps so they decided to pull the cars back. This was followed by further developments and intensive testing on potential routes of the Touring Car Championship 1970, which promised good chances of success; but the racing class, which should be started in 1970, was abolished. Therefore, the factory activities were terminated except for a few tests.

Privateers had more success, in 1971 three private 6.8-liter touring cars were on the road. The silver metallic painted by Klaus Behrmann, which technically corresponded to the last stage of development of the factory cars with around 360 hp, automatic and 10 or 12-inch wheels, won seven of eight circuit and airfield races.

AMG, however, took for their red racer (nicknamed "Red Sau") an accident W 109 as a base, built the engine with Daimler-Benz parts itself and combined it with a five-speed ZF transmission. At the 24-hour race in Spa in 1971 they drove to class victory and in second place in the overall standings. At the end of his career, the car reached 428 hp, 620 Nm and 265 km / h.In 1972, the regulation introduced a displacement limit of five liters. 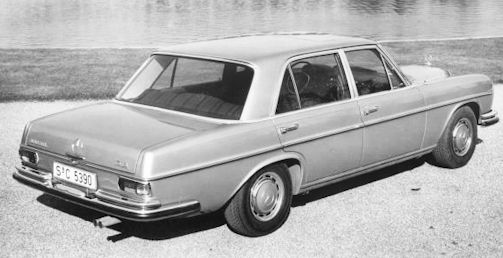