It was in January 2014, on the North American International Auto Show (NAIAS)  for the first time presented to the public and replaced since 15 March 2014, built between March 2007 and May 2014 C-Class of the 204 series . The series production of the sedan began on February 4, 2014. The combination model ( Model T ) was first presented on 23 May 2014 for production plant in Bremen, the launch took place in September of the same year. At the International Motor Show (IAA) in September 2015, the Coupé was premiered, which has been delivered since December.On February 29, 2016, as part of the Geneva Motor Show presents the cabriolet version. In March 2018, the facelift and a diesel was plug-in hybrid unveiled version at the Geneva Motor Show. It was introduced on July 7, 2018. 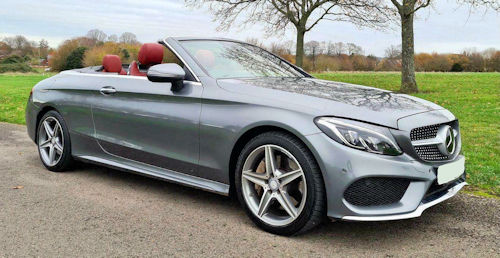 The coupe (C 205) increases in length compared to its predecessor by about 6 cm. In addition, the 205 series includes a convertible (A 205) .

Furthermore, the model will be the first Mercedes-Benz touchpad for infotainment operation and a head-up display . The touchpad can be used to enter letters and numbers, as with competitors' pads. Even the multimedia system can be operated with the touchpad, but still there is a turn-pusher-controller available.

The weight of the 205 series body shell is reduced by 70 kg due to the increased proportion of hot-formed steel parts, ultra high-strength steel and aluminum. Most externally visible body parts are made of aluminum. Overall, the aluminum content of the body rose from nine percent in the previous model to 48 percent. Another part of the weight reduction of 100 kg is achieved by a smaller tank. This holds standard 41 liters including reserve and thus 18 liters less than its predecessor.  A larger fuel tank with 66 liters including reserve is available on request.

The 205 series C-Class is available in two hybrid variants:

The C 300 h diesel engine full hybrid (until April 2015: C 300 BlueTEC HYBRID ) has an electric motor integrated in the gearbox housing with a maximum output of 20 kW and a lithium-ion battery with 0.8 kWh of energy content, which means low power Speeds and very low load requirement purely electric driving is enabled.

The gasoline engine plug-in hybrid C 350 e has an electric motor integrated into the gearbox housing with a maximum output of 60 kW and a torque of 340 Nm. In conjunction with the four-cylinder petrol engine M274DEH20LA results in a system power of 205 kW (279 hp) and a system torque of 600 Nm. According to the NEDC can be achieved purely electric range of 31 km. Since ancillaries such as the water pump , the vacuum pump , the power steering pump and the air conditioning compressor were electrified, eliminating the conventional belt drive. The generatoralso omitted, the 12 V electrical system is powered by a DC / DC converter from the high -voltage electrical system . Behind the rear axle, about 100 kg, is coolant-cooled lithium-ion battery housed with 6.38 kWh energy content, whereby the luggage capacity of 480 to 335 liters (saloon) or from 490-1510 to 450-1470 Liter (T-model) reduced. It is a from 88 in series-connected cells (22 Ah, 3.3 V) existing lithium iron phosphate secondary battery with a nominal voltage of 290 V.  Overall, the C is 350 e 230 kg heavier than the comparable C 250.

The name for the equipment lines has been completely changed after more than two decades, so that in addition to the basic equipment now the lines Avantgarde , Exclusive and AMG Line are available, which can be selected independently of each other for the exterior and for the interior.

The standard equipment is the Mercedes-Benz starno longer mounted on the hood, but embedded in the radiator grille. Black and white are available as standard uni-paint. The curb trim is in polished aluminum, while the window surround is in black. The C180d, C160 and C180 come as standard with 16-inch steel wheels with wheel covers, all other models are already equipped with light-alloy wheels. All models are equipped with heat-insulating green glass. The headlamps are designed in halogen technology, but have LED daytime running lights. The rear lights consist exclusively of LED lights. The chassis is, like its predecessor equipped with the selective damping system. The smaller engines are coupled to a six-speed manual with an automatic start-stop system and have a speed-dependent direct steering. Other standard features on all models include an automatic climate control, a leather tri-spoke multifunction steering wheel and the audio systemAudio 20 USB with a seven-inch color display and a resolution of 800 × 480 pixels. The safety equipment includes ABS, ESP, various airbags - including a knee airbag for the driver - and the collision warning system Collision Prevention Assist Plus .

The equipment line avant-garde contains a larger number of chrome elements. On the front bumper is a chrome clasp, in the outer air inlets a double chrome trim (by 2015) attached. The grille, in which the brand logo is embedded, consists of two slats in silver matt with chrome inserts. These chrome inserts visually pull over the side skirts into the rear bumper. Compared to the basic model, the window frames are made of polished aluminum and the B-pillar is glossy black. The rear bumper is designed in diffuser optics. The Avantgarde line also has a suspension with lowered suspension (can be deselected on request). Standard gray-painted 17-inch alloy wheels in five-spoke design are included.

The Exclusive equipment line is the only model in the 205 series to feature the classic Mercedes-Benz chrome radiator grille with a Mercedes-Benz star on the bonnet. The standard multi-spoke alloy wheels are 17 inches tall. Otherwise, the equipment essentially corresponds to the line avant-garde with the exception of the lowering, which is not included in the Exclusive .

The predecessor model nor as AMG Sports package guided AMG Line is characterized by AMG aprons and -Schweller and by gray painted 18-inch AMG from alloy wheels in five-spoke design. The rear bumper has two tailpipe trims made of aluminum. Otherwise the equipment corresponds to the lines Avantgarde and Exclusive . In addition, however, there is still a sports suspension with a lowering by 15 mm, a sports direct steering and perforated front brake discs. 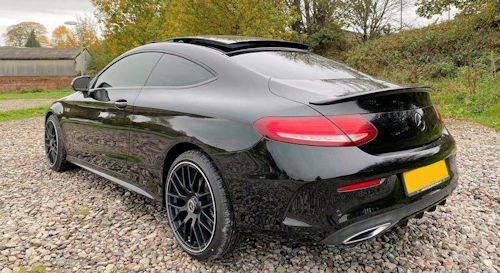