Mercedes-Benz X 156 is the internal code for the Mercedes-Benz GLA . The compact SUV from Daimler AG was presented at the 2013 IAA ; with the launch was on March 15, 2014. The X 156 is the fourth model based on the modular front-drive architecture (MFA).  At the time of its launch had GLA the main competitors are the Audi Q3 and the BMW X1

Seven models were available for market launch, including three with petrol and four with diesel engine . Since September 2014, there is the GLA 180 CDI as a diesel entry-level model and since February 2015 as the cheapest model in the series the GLA 180 with gasoline engine.

The two smaller gasoline engines in the GLA 180 and GLA 200 and the diesel in the GLA 180 CDI are only available with front-wheel drive ; the GLA 45 AMG , available since July 2014 , comes as standard with all-wheel drive , which is called Mercedes-Benz 4MATIC . For the stronger models, it is also available at extra cost. There are ten engine / drive combinations. While the smaller models GLA 180 , GLA 200 , GLA 180 CDI and GLA 200 CDI come as standard with a six-speed automatic transmission with automatic start-stop, the GLA 250 and GLA models are standardThe GLA 220 CDIand all 4MATIC models are exclusively available with the 7G-DCT seven-speed dual-clutch transmission .

The GLA is the first Mercedes-Benz vehicle to offer the revised 4MATIC permanent four - wheel drive system with variable torque distribution between the front and rear axles.

The facelifted version of the GLA was presented by Mercedes-Benz at the North American International Auto Show 2017 in Detroit; she is sold since spring 2017. and replaced by the second generation in 2020. 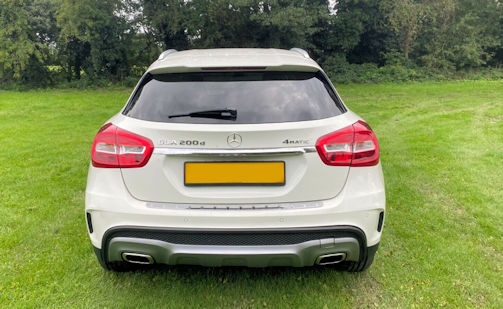