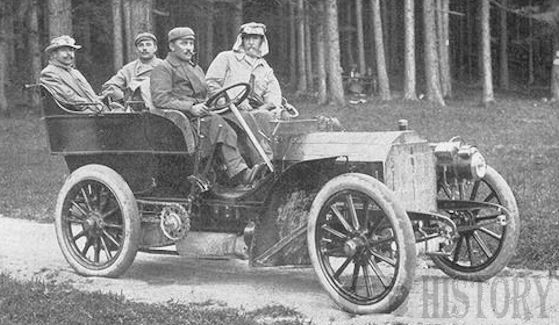 Wilhelm Maybach's Mercédés design in these early years was notable for its use of a pressed steel chassis frame instead of wooden, and selective gate gearchange of the type still common today, honey-comb rather than gilled-tube radiator, and mechanically actuated rather than atmospheric valve gear.

The cars made their debut in racing trim at Pau in 1901, but failed dismally to make a impression. The new marque redeemed itself at Nice soon after ,where Werner's 5-9-litre 35 hp car covered the flying-start kilometre faster than all other petrol-engined cars, and was beaten only by Léon Serpollet's Land Speed Record Steamer.

Werner won the Nice-Salon-Nice race and Mercédés were 1-2-3 at the important La Turbie hillclimb. The 1902 Mercédés competition models used a 6.8-litre engine rated at 40 hp. Although Stead's car won at La Turbie, the 1902 cars did not achieve the great success expected of them and their very advanced mechanical specification.When Jellinek received his first Simplex on 1 March 1902 at Nice, he rushed to incorporate it into his Mercedes race team, competing in the Nice-La Turbie hill climbing race. He defeated all his opponents again and set new records.

On 7 April 1902, during Nice week, Albert Lemaître finished second in the Nice – La Turbie mountain race driving a Mercedes Simplex. He was competing in the category for racing cars weighing more than 1000 kg.Also in 1902, in the United States, a Mercedes Simplex won the 5-mile track race at Grosse Pointe, Detroit.

In this 1902 campaign, the third step involved William K. Vanderbilt Jr, a US multimillionaire and race car enthusiast who created in 1904 the American Vanderbilt Cup. He had already set several records with the previous Mercedes, in some of the most popular races around the turn of the century, usually long distance ones.Now, with the Mercedes Simplex, Vanderbilt took part in the 600-mile race to Paris. Later, he broke all records in the Ablis to Chartres race with flying start, with a top-speed of 111.8 km/h.

In 1903 the new 9.2-litre 60hp model could achieve 75 mph on the roads of the time. Mercédés took 31 minutes off the La Turbie record, and fully 5-9 seconds off the standing-start-mile time along the sea front record strip at Nice. 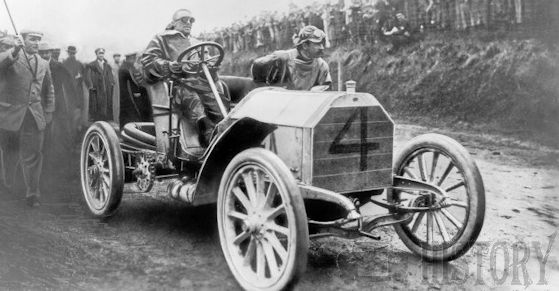 They were to progress to great things in coming years, including the 1903 Gordon Bennett Trophy race in Ireland which fell to Camille Jenatzy's modified 90hp touring '60'car. The Gordon Bennett Cup was an annual International event contested by carefully chosen national teams of three cars each.
The competition was French-dominated until 1902, when Selwyn Francis Edge's Napier was the sole runner to complete the distance from Paris to Salzburg. This British victory gave the Royal Automobile Club of Great Britain and Ireland the right to organize the 1903 event on their home territory. Since it was impossible to gain permission to close public roads on the mainland for motor racing use, a large figure-of-eight course was chosen near Ballyshannon in what is now Eire. The Germans produced an excellent racing car in their 90hp Mercédés model, but just one month before the Irish race took place the Mercédés factory at Canstatt, near Stuttgart, was swept by fire. The racing department was gutted and its 90hp cars were destroyed.

Bt 1908, Germany The competitive events which first developed a true 'sports car. breed were organized in Germany before World War I. They were known as the International Touring Car Competition Or the Herkomer Trophy. The first competition was sponsored by Professor Hubert von Herkomer.

French Mercédés customer named Baron Pierre de Caters contacted Emile Jellinek, salesman-cum-promoter of the Daimler-built cars which were named after his daughter (Mercedes Jellinek), and suggested that stripped 60hp production models such as his own might do the job in Ireland. The company
took up de Caters's idea, stripped his car of unnecessary fittings and entered him in the Gordon Bennett. Another 60hp was called back from American sportsman Clarence Gray Dinsmore. His chauffeur Wilhelm Werner was, however, judged by the German club to be insufficiently qualified as a 'gentleman driver' to represent his country. The Belgian Camille Jenatzy therefore took his place. At Ballyshannon the two stripped production Mercédés 60s ran very well, and Jenatzy scored Mercedes's first major International victory, averaging 49.2 mph over 327 miles. being a portrait of the winner painted free of charge by the Professor himself. It began in 1905 and was won by a hefty Mercédés 40 with more or less standard heavyweight coachwork. In 1906, however, coachwork regulations were relaxed and lightweight bodies appeared, to aid the cars' power-to-weight ratio and so improve their performance.