Production began in 1964 and almost 600 variants were built until 1972. The oil crisis, as well as the introduction of new S-Class models, slowed demand. Modest production continued until 1981. During this time, 2,677 vehicles were made. 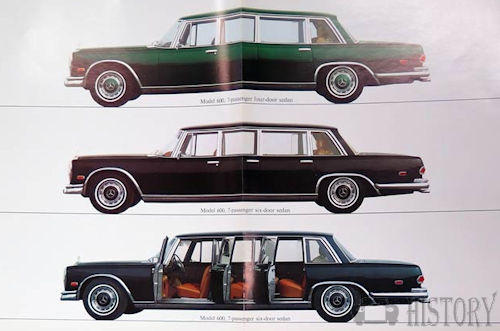 The 600 came in two main variants:

A single example of 4-door landaulet was built by Mercedes in 1967. The vehicle was commissioned by Count von Berckheim, the ex-racing driver. This car combined the handling qualities of a short-wheelbase design with the traditional virtues of the landaulet.

Mercedes also made two coupés, one of them was made by Mercedes as a gift for Dr. Rudolf Uhlenhaut when he retired. He had designed the car, together with Fritz Nallinger and Karl Wilfert. A third coupe was constructed from a 600 SWB by Karl Middelhauve and Associates.

A SWB car was also converted into a funeral coach (hearse). More recently, in the 2000s, two SWB cars (one a 1965 model and the other a 1966) were converted into Chevrolet El Camino-esque pick-up trucks. Both are virtually identical but with different paint schemes. The cars were created by Karl Middlehauve of Wausau, Wisconsin along with a handful of craftsmen.

The 600 was so heavy that the largest engine of Mercedes at that time, the 6-cylinder 300, was inadequate. Instead a new engine with more than twice the capacity was developed to move the vehicle and its hydraulically powered amenities, the 6.3 L V8 "M100" engine with single overhead camshafts (SOHC), and Bosch mechanical fuel injection.

The 600 featured many luxury features, including a complex hydraulic 150-bar (2,176 psi) pressure system that powered everything from the windows and seats to the automatically closing doors, sun-roof, and boot lid. Adjustable air suspension gave the car a good ride quality and handling over any road surface. 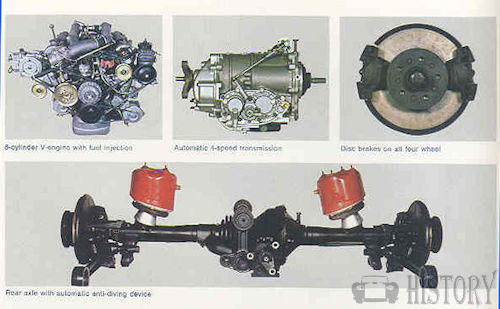 In television, a Mercedes Benz 600 limousine was used by Angela Channing, matriarch of the fictional Channing/Gioberti family, in the American television series Falcon Crest. Images of the car driving from San Francisco over the Golden Gate Bridge to the Falcon Crest vineyard were featured in the opening credits of the first four seasons.

The Mercedes 600 has also featured in the James Bond films, most notably as transport of the villain Ernst Stavro Blofeld in On Her Majesty's Secret Service and Diamonds Are Forever. Kamal Khan is also seen leaving Sotheby's in a 600 in Octopussy.