The Mercedes-Benz Type 300 (chassis code W186) were the company's largest and most-prestigious models throughout the 1950s. Analogous to the top of today's S-Class, the Type 300 cars were elegant, powerful, exclusive, and expensive.

Two types were produced, a four-door tourer equal in luxury and price but superior in performance to the rival Rolls-Royce Silver Cloud,and and an all but handbuilt two-door sports tourer rarified in elegance, proportion, and cost.

The four-door 300, 300b, 300c (chassis code 186), and successor 300d (chassis code 189) models were often referred to as Adenauers after Konrad Adenauer, the first Chancellor of the Federal Republic of Germany. In office from 1949 to 1963, he employed six custom convertible, hardtop, and landaulet versions during his tenure.

These large saloons and cabriolets incorporated many luxury features. Options such as Becker radio, VHF mobile telephone, and dictation machine were geared to the business man and politician. Among the custom features in Chancellor Adenauer's "parade cars" were writing desks, sirens, curtains, dividing partitions, sunroofs, and half-roof landaulet configurations.

The exquisite two-door 300s (chassis code 188) and its successor 300Sc were the pinnacles of the Mercedes line of their era. Each were available in 2+2 coupe, cabriolet, and roadster versions.

Designed to give reliable service under prolonged hard use, the engine featured deep water jackets, thermostatically controlled oil cooling, copper-lead bearings and a hardened crankshaft. With no natural cruising speed, the car could sustain anything up to its maximum speed all day, road conditions permitting.

The six passenger Type 300 was available both as a saloon or cabriolet (officially called Cabriolet D). A central lubrication system was fitted, along with an innovative dashboard-operated rear load-levelling suspension that engaged a tortion bar to increase stiffness by one-third.

The 300's frame was made of ovoid steel tubes, with a double wishbone, coil spring axle and stabilizer bar up front and Mercedes' typical double coil spring rear swing axle. Brakes were hydraulic drum all around, steering worm-and-sector, replaced in 1952 by a recirculating ball unit.

The Type 300b was introduced in March 1954, adding vacuum assisted power brakes and front door vent windows. Engine power was upped to 125 PS (92 kW; 123 hp) via different Solex carburettors and a higher compression ratio (7.5:1 instead of 6.4:1). 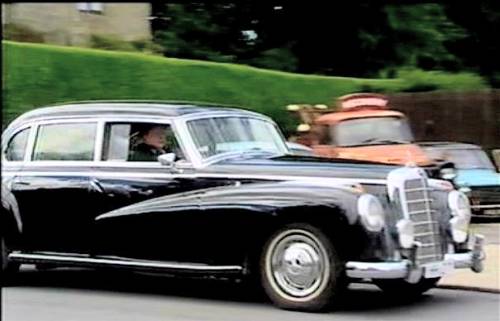