The Mercedes-Benz E-Class is a range of executive cars manufactured by Mercedes-Benz in various engine and body configurations. The E initially stood for Einspritzmotor (German for fuel injection engine); a new feature in volume production vehicles at the time that the E-Class first appeared, with the E as a suffix to the engine nomenclature (e.g. 230E) in the 1950s. It was not until the launch of the facelifted W124 that the E was used as a prefix (i.e., E220) and the model referred to officially as the E-Class (or E-Klasse). At this time all Mercedes cars used fuel injection and the company felt it was not necessary to add this as a distinguishing feature. Due to the E-Class's size and durability, the cars also frequently serve as taxis in European countries. Older models like the W123 and W124 are used in Malaysia as inter-state taxis, and the W211 is used in Singapore as a taxi. Mercedes-Benz also offers special-purpose vehicles (e.g., police or ambulance modifications) from the factory.

Mercedes added tailfins to both the big S-Class and the new W110 'Fintail' 190 of 1962. Straight-6 power appeared for the first time in the 1965 230 model, and the fours grew in displacement that year as well.

The mid size Mercedes was redesigned in 1968 as the W114/W115 'Stroke-8'. This time, the 6-cylinder models (The W114s) were most prevalent, with the W115 line making up the bottom of the company's offerings with four – and five-cylinder power. Diesel engines joined the line-up, as did a coupé body.

The popular W123 quickly became a best-seller on its launch in 1976. Especially in Diesel 240D (and later 300D) guises, the cars enhanced the company's reputation for product quality. Over 2.3 million were produced until the end of production in 1986.

The W210 E-Class, launched in 1995, brought the mid-size Mercedes firmly into the upper end of the luxury market. Though six-cylinder models were still offered, the four-light front end and high prices moved the car upmarket. In September 1999 the W210 E-class was facelifted. This included visual, mechanical and quality improvements over the earlier versions.

The Mercedes-Benz E-Class was Motor Trend's Import Car of the Year for 1996.

Launched in 2002, the W211 E-Class was another evolution of the previous model and was considered by the motoring media as an even more competitive offering to the long term rival BMW 5-Series (which previously was the preferred choice of the motoring media). Before North American sales began, the car was shown in the 2002 movie Men in Black II.

The W211-based W219 CLS-Class 4-door coupé was introduced as a niche model in 2005, primarily to attract a younger demographic.

The W211 E-Class was facelifted in June 2006 for the 2007 model year to address quality and technical issues raised by earlier models, Sensotronic was dropped, while Pre-Safe (w/o brake support) was made standard. The largest factory built engine in the E-class range is the E500 (badged E550 in the U.S.) which had its engine size increased from 5 litres to 5.5 litres in 2006 along with the facelift. There is also an AMG model badged E63 AMG and other tuning house installations.

In 2007 the diesel version of the E-Class was rebadged from CDI (Common rail Direct Injection) to Bluetec. While in some of the other Mercedes-Benz diesels urea injection was added, in the W211 E-Class the Bluetec name was only adopted to prevent confusion in the diesel lineup.

The W212 replaced the W211 in 2009. Official photos of the W 212 were leaked on the internet on 9 December 2008 ahead of its 2009 Geneva Motor Show unveiling. Scans of a leaked brochure were posted onto the internet in January 2009, detailing the whole E-Class range including the new E 200 CGI and E 230 CGI with direct injected forced inducted engines.New features include a blind spot monitor, Lane Keeping Assist, Pre-safe with Attention Assist and Night View Assist Plus. In the United States the E-class will be priced nearly US$4,600 less than the previous model. The E-class coupe is built in Bremen using the W204 C-class platform. The W212 estate was also announced and goes on sale from November 2009. The W212 cabriolet was announced January 11, 2010 at the North American International Auto Show, for sale March 27, 2010 in Europe and in May 2010 in the United States. 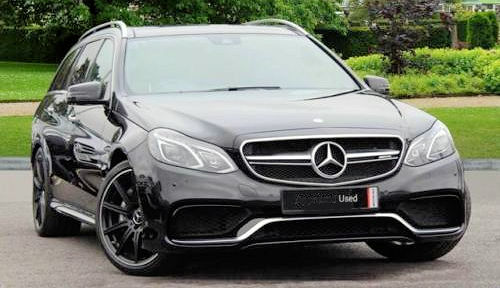 The styling has been altered for both aesthetic and practical purposes: AMG side skirts and rear apron give the E63 more aggressive styling, and the larger air apertures on the front of the car allow for more air intake to the naturally aspirated 6.2 litre V8. Another styling change on the E63 is the wider, flared front wheel arches which accommodate the AMG front axle with a 2.2-inch-wider (56 mm) track.

Portland Speed Industries, a performance shop in Hillsboro, OR, have tested a 2012 E63 AMG biturbo on their Dynojet dynamometer and it produced 479 whp and 561 lb·ft (761 N·m) of torque.

Erebus Racing have announced that they will race three E63's in the V8 Supercars from 2013, buying out Stone Brothers Racing.