The Mercedes-Benz W111 was a chassis code given to its top-range vehicles, including 4-door sedans, produced from 1959 to 1968, and 2-door coupes and cabriolets from 1961 to 1971. The W111, was initially attributed only to 6-cylinder cars with 2.2-litre engines. The luxury version with big-block 3-litre engines were given the chassis code W112. The entry-level vehicles with 4-cylinder engines were called W110. All three versions W110, W111, and W112, in both 2- and 4-door bodies, were built on an identical chassis.

Mercedes-Benz emerged from World War II as an automaker in the early 1950s with the expensive 300 Adenauers and the 300SL roadsters that gained it fame, but it was the simple unibody Pontons that were the volume models.

Work on replacing these cars began in 1956, and the design focused on passenger comfort and safety. The basic Ponton cabin was widened and squared off, with larger glass area improving driver visibility. A milestone in car design were front and rear crumple zones that would absorb kinetic energy from impact. The automaker also patented retractable seatbelts.

The exterior was designed for the European and North American markets. The body was modern and featured characteristic tailfins that gave the models their nickname — the fintail (German: Heckflosse).

Series production of the 4-door sedan began in August 1959, and the car was premiered at the Frankfurt Auto Show in autumn. Initially the series consisted of three models the 220b, 220Sb, and the 220SEb. These replaced the 219 W105, the 220S W180 and the 220SE W128 Ponton sedans respectively. The 220b was seen as a budget version lacking the extra chrome trims on the exterior, and having more simple wheel hub caps, interior trim and even pockets on doors. The prices for the three cars was 16,750, 18,500 and 20,500 in Deutsche Mark respectively. Production ratio was roughly at a rate of 1:2:1.

In 1961, the fintail range was filled with three new models, a simplified 4-cylinder W110, an identical, but fitted with a big-block 3-litre engine W112, and a 2-door coupe/cabriolet of the W111/W112 (see below). Though never attributed as part of the fintail family, the Mercedes-Benz W113 Pagoda roadster was designed as an identical modernisation of the 190SL Ponton, and came about in 1963.

In summer 1965, production was terminated in launch of the new Mercedes-Benz W108 sedan. A total production of each was: 220b - 69,691, 220Sb - 161,119, and 220SEb - 65,886. Earlier in May, Mercedes-Benz gave its budget-range W110 cars a major facelift and in doing so opted to continue producing the W111 as a new model 230S. Previously the W110 was separate in terms of marketing and was classed as a 4 instead of 6-cylinder, 1965 turned that around. Despite their visual differences the cars were practically identical in terms of chassis and drivetrain. In 1965 the W110 was equipped with a six-cylinder engine, creating the model 230. The 230S, became a flagship model of the Mercedes mid-range cars (predecessors to today's E-class). 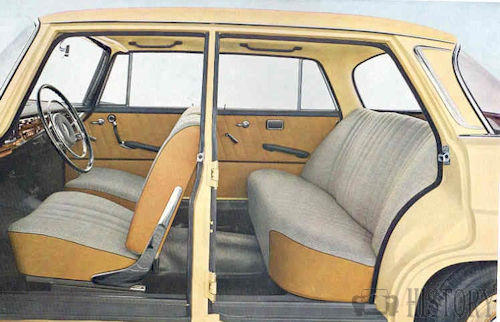 Design of a replacement for the two-door Pontons began in 1957, as most of the chassis and drivetrain were to be unified with the sedan, the scope was focused on the exterior styling. Some of the mockups and prototypes show that Mercedes-Benz attempted to give the two-door car a front styling almost identical to what would be realised in the Pagoda roadster, but ultimately favoured the work of engineer Paul Bracq. The rear bodywork however, persisted, and thus, though officially still called a fintail the rear end design had no chrome fin highlights.

Production began in late 1960, and in February of the next year the coupe was premiered in Stuttgart for the 75th anniversary of the opening of Mercedes-Benz Museum. The convertible followed at the Frankfurt Auto Show a few months later; the car was almost identical to the coupe, with the soft-top roof folded into a recess behind the rear seat and covered by a tightly fitting bag. Unlike the previous generation of two-door ponton series, there was only one model for the 2-door vehicle, the 220SE on both versions, with the identical M127 2195 cc engine. Prices in 1962 were 32,500 for the coupe and 36,000 NLG for the cabriolet. Options included a sliding sunroof for the coupe, automatic transmission, power steering, and individual rear seats.

In March 1962, Mercedes-Benz released the almost identical two-door 300SE. However, due to marketing reasons, this car, like its sedan stablemate, was kept apart from the 220SE, and had its own chassis number W112, which envisioned it as a successor to the W187 300S two-door series, rather than the Ponton range. The car was featured with a chrome strip, air suspension and Daimler's top-range 2996 cm3 M189 engine. For prices of 45,000 and 48,500 for the hard and soft roofs respectively, this vehicle remained split from the rest of the W111 family.

In summer of 1965 Mercedes-Benz launched its new replacements for both W111 and W112 sedans, the W108 and W109 respectively. In a bizarre twist of fate, this car's design was based on the W111 coupe, but widened and squared off, as the fintail fashion was quickly eroding by the mid 1960s. Design work on a future new chassis that would fully replace the Ponton-derivatives which both W111/W112 and W108/W109 were, was well under way (the concept car of the first S-Class was shown in 1967). Given these two facts, Daimler did not develop a W108/W109 two-door vehicle at all and continued production of the W111/W112. However both models were modernised; the 220SE was superseded in early autumn by the 250SE which featured the new 2496 cm3 M129 engine, producing 150 horsepower (110 kW) at 5500 rpm, which gave it a significant improvement in top speed, 193 km/h (120 mph) (188 km/h (117 mph) on auto), and 0–100 km/h acceleration 12 seconds (14 on auto). Visibly the changes only affected the new 14-inch rims with new hub cabs and beauty rings; this was to accommodate the larger disk brakes and the new rear axle from the W108 family.

In November 1967, the 250SE was superseded by the new 280SE. The new M130 engine had 2778 cubic centimetres volume, and output 160 hp (120 kW) at 5500 rpm. Top speed was hardly affected, the acceleration though improved to 10.5 seconds (13 on auto). Inside the car received a wood veneer option on the dashboard and other minor changes including door lock buttons and different heater levers. The hubcaps were changed yet again to a new one piece design and the design of the exterior mirror changed. The 300SE, based on early 1950s M189, was also retired. The modern 280SE could outperform the 300SE despite the smaller engine.

The coupe and cabriolet was back to a single model until its replacement, the new-generation chassis in 1968. 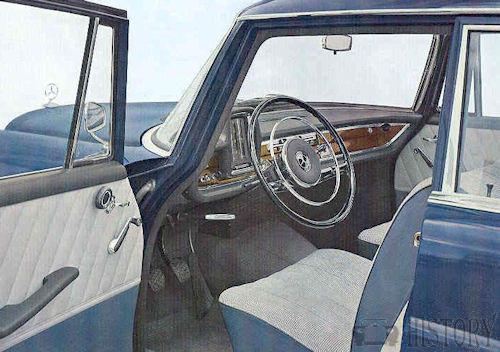 The replacement for the 2-doors models was the C107 SLC, focusing on compact sportiness. Moreover for nearly two-decades the convertible would disappear from Mercedes-Benz's lineup altogether (only in 1992 will Daimler launch the A124).