The Mercedes-Benz W140 is a series of flagship vehicles that were manufactured by the German automotive company Mercedes-Benz. In December 1990, Mercedes-Benz unveiled the W140 S-Class via press release, later appearing in several February and March editions of magazines. The W140 made its public debut at the Geneva Motor Show in March 1991, with the first examples rolling off the production line in April 1991 and North American examples on August 6, 1991. Short (SE) and long (SEL) wheelbase sedans were offered initially, as well as the coupé (SEC) body style from October 1992.

Like all Mercedes-Benz lines, the W140 S-Class was rationalized in late 1993 using the new "letter-first" nomenclature. The SE, SEL, and SEC cars were renamed the S-Class, with alphanumerical designations inverted. For example, the 500 SE became the S 500, and the 500 SEL became the S 500 L. In 1996 the coupé models following a mid-life update were separated into the CL-Class. The W140 series S-Class was superseded by the W220 S-Class sedan and C215 CL-Class coupe in 1999 after an eight-year production run. 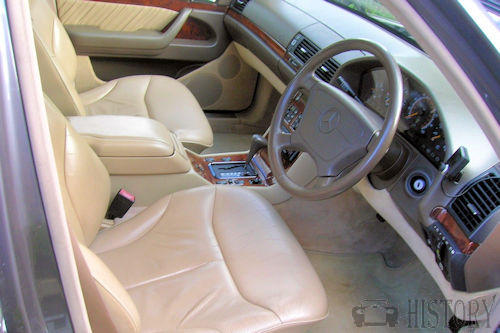 As with its predecessor, the W140 was the first of the "next generation" of Mercedes-Benz models to feature the company's new design theme.

Development on the W140 began in 1981, originally set for an October 1989 production start. From 1982 to 1986 several designs were reviewed, until December 9, 1986 when a definitive design was approved. Several prototypes were tested onwards from early 1987 and the final production exterior design was approved in late 1987, with domestic design patents being filed on February 23, 1988 and U.S. patents 6 months later on August 23. The design was said by lead designer Bruno Sacco to be influenced by Jaguar's XJ40 sedan and BMW's E32 7-Series. Before production started, the exterior appearance of the W140 was revised in the form of the grille on all W140s being recessed as opposed to a planned exclusive grille on the top model, a feature which later spread to the rest of the range. In 1987, an 18-month delay was made from 1989 to 1991 to accommodate a V12 engine and a high-performance braking system. This resulted in the final development prototypes being completed in June 1990. Pilot production models were made from June 1990 to January 1991.

The W140 introduced innovations such as double-pane window glazing, power-assisted closing for doors and boot lid, electric windows which lowered back down upon encountering an obstruction, rear-parking markers which rose from the rear wings (discontinued on later vehicles, and replaced with sonar-assisted parking) and a heating system which, if desired, continued to emit warm air after the engine was turned off. For details like this, the W140 is often known as the last Mercedes to be "overengineered," a Mercedes trait that was costing the company in product delays and overbudgeting. According to Motor Trend, this action reportedly caused project cost overruns and resulted in the departure of Wolfgang Peter, Daimler-Benz's chief engineer. The vehicle is believed to have cost Mercedes-Benz over $1 billion to develop. For the consumer, the W140 cost a considerable 25 percent more than its predecessor, the W126.

The W140 was to feature air-suspension as an option, but it was dropped shortly before launch because Mercedes was still perfecting the technology at the time. Mercedes chose to launch air-suspension in the next generation S-Class in 1999. The W140 instead used a hydropneumatic rear suspension, first introduced on the W116 450 SEL 6.9 (introduced in 1975) to be used on the S 500 and S 600 models. Following the mid-year facelift in 1994, Mercedes-Benz made Electronic Stability Control an optional fixture to both sedan and coupé body styles in the W140 range. Both the sedan and coupé body styles were equipped with Acceleration Slip Regulation (ASR) as a standard feature.

In 1993, the 402 horsepower ( 408 hp Europe ) V12 engine was slightly detuned to 389 horsepower to comply with tighter emission control regulations in the United States and Europe. The V8 models were tuned down from 322 horsepower to 315 horsepower. This de-tuning, among other changes, involved the deletion of the full-throttle enrichment circuit, which reduced output by 7 horsepower.

The W140 600 SEL was available with wooden rear ash tray covers, wood/leather shift knob, leather dashboard and a suede headliner, unlike the V8 and inline 6-cylinder models. Following the facelift in 1994, the S600 was updated with a wood/leather steering wheel, a V12 badge on the wood/leather shifter, double needle stitching all over the interior and two tone nappa leather seating – further distinctions from its lower rung siblings. 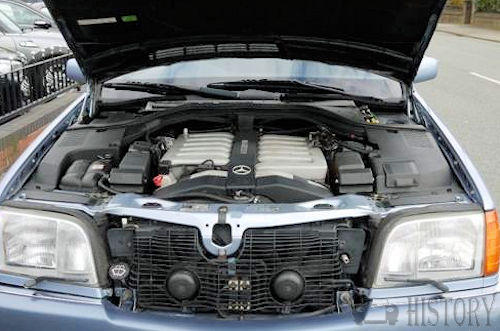 In June 1993, as part of the new corporate naming campaign, the model range was renamed. This resulted in all SE and SEL models now being re-designated as "S", being followed by the numbering.

In late 1991, following the new Mercedes-Benz tradition of mid-life facelifts (starting with the W123 in 1979), after worldwide launch, work begun on improvements to the W140. By 1992 final design changes were approved and later patented(application) on February 27, 1993, exactly 5 years after the original W140 design patent application in 1988. In March 1994, the updated models were unveiled at the Geneva Auto Salon and went on sale in April 1994 in mainland Europe and in other markets during the second half of the year. The clear turn signal indicator lenses on the front and new taillights were the most obvious change, as was the grille including a new and distinctive one for S 600s. Headlamps were fitted with separate low H7, H1 fog, and high H1 beam reflectors in 1994, pre-1995 models used an H4 bulb and H3 for the fog lamp. In April 1995, "Parktronic" replaced the parking guiders on the rear boot lid. In 1995, the two tone exterior appearance was made to be monotone, xenon headlamps were added and the rear indicator lenses became clear. The changes were later introduced in June 1996 as 1996.5 models in Europe and 1997 models in the United States.

The car is infamous for being the model in which Diana, Princess of Wales died following a high-speed car accident in which she (as with the driver and the other passengers) was not wearing her seat belt and the driver was intoxicated. Princess Diana, driver Henri Paul and partner Dodi Al Fayed died as a result of the accident.

The flagship model of the W140 lineup, the S600 (600SEL until 1993) LWB saloon set new standards of performance, the likes of which had never been achieved with such a heavy robust car up to that time. The 6.0 V12 engine was capable of accelerating the 2 tonne, 18 foot saloon to 100 km/h in as little as 5.5 seconds and with a top speed of 179 mph with the limiter removed. Mid to high range acceleration is immense and closely matches the first generation S63 AMG model in this regardEven today the S600 is still popularly used as an alternative performance option to the newer, more expensive AMG models. 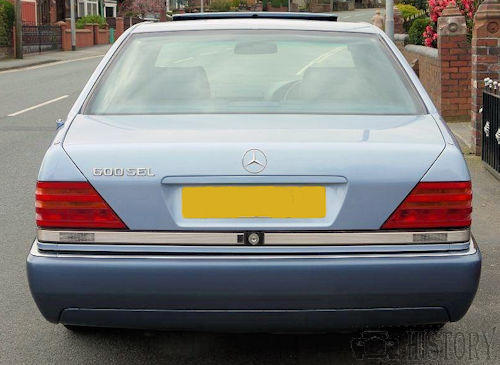 There were available, a limited number of the SEL600 model with an AMG aftermarket powerpack upgrade, increasing the power output to approximately 445PS with 623NM of torque thanks to slightly more aggressive camshafts, pistons and connecting rods and a computerised remap of the original ECU